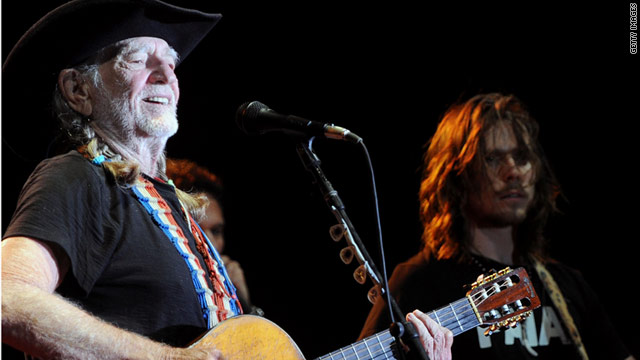 (CNN) -- Willie Nelson settled his latest pot bust with a plea deal that reduced the marijuana possession charge to possession of drug paraphernalia and imposed a $500 fine, his lawyer said Tuesday.

The charge will drop from Nelson's criminal record if he stays out of trouble for 30 days, according to attorney Joe Turner.

The west Texas prosecutor handling the case had previously suggested Nelson could pay just a $100 fine if he'd serenade the court with his 1975 hit "Blue Eyes Crying in the Rain."

Judge Becky Dean-Walker, however, vetoed that offer when it surfaced in March.

"My court is not a jester court," Judge Dean-Walker told CNN. "I understand that people are star-struck, I'm not one of them."

Nelson, a treasured icon in the Lone Star state, was charged with marijuana possession after U.S. Border Patrol agents searched his tour bus on a Hudspeth County, Texas, highway near the U.S.-Mexico border, about 85 miles southeast of El Paso last November.

"You can bet your ass I'm not going to be mean to Willie Nelson," Hudspeth County Attorney C.R. "Kit" Bramblett told CNN in March.

2010: Nelson: Pot will be legal one day
RELATED TOPICS

The prosecutor joked that while Nelson was initially charged with possession of 6 ounces of pot, which would put the case out of his jurisdiction, he and the sheriff smoked or threw out enough to bring it into his jurisdiction.

Nelson was "very happy" to have the case settled without having to appear in court, his lawyer said.

"He worries about it," Turner said Tuesday. "It's not just a speed bump to him. It hasn't been a holiday for him."

The sentenced will be deferred, which means it will fall off his criminal record after 30 days of good behavior, he said.

"The truth is there are a lot of people who had access to the tour bus, and it's not an open-and-shut case," Turner said. "I'd like to think it was because he had a good lawyer."

Turner, who also represented Nelson in a 1994 marijuana possession case, laughed as he called the singer "incorrigible."

Pot smoking on Nelson's bus is no secret, Bramblett said. "They got a song out that says 'I'll Never Smoke Weed With Willie Again.' "

Asked where Nelson was when he learned the case was settled, his lawyer said "He's on the road again."