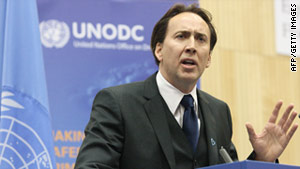 Los Angeles (CNN) -- Nicolas Cage and his ex-girlfriend agreed on a financial settlement to end a lawsuit that she filed against the actor over his promise to give her the home where she raised his son.

Christina Fulton's lawyer would not disclose the terms of the deal, but she called it "mutually satisfying" for both sides.

When a Los Angeles County sheriff's deputy, who was escorting Cage out of the courthouse Tuesday afternoon, said to him "Long day, huh?" the actor grunted and said "Yeah."

Cage, Fulton and their lawyers spent much of the day mediating the case in the chambers of Los Angeles County Superior Court Judge Teresa Sanchez-Gordon.

At one point, Judge Sanchez-Gordon walked into the courthouse hallway to consult with Fulton and her lawyers, with reporters standing nearby. It was the only public clue that a large sum of cash was about to change hands, although the amount is secret.

Fulton, the mother of Cage's 20-year-old son, filed her $13 million lawsuit two years ago, accusing Cage of breaking his promise to let her keep the Hollywood home where she raised Weston Cage. Although she is still living in the home, she faces eviction since Cage allowed it to go into foreclosure, she said in a recent CNN interview.

It was not revealed whether the lawsuit settlement would allow her to keep the house.

A huge federal tax debt and the falling value of his investments caused Cage to lose several other homes in the past two years.

Their son was placed on a psychiatric hold in a Los Angeles hospital for several days last week after a violent incident on a Hollywood sidewalk.

Fulton said the resolution of her lawsuit clears the way for her to seek a conservatorship of her son. The mother claims he needs special psychiatric care that he has not gotten since he moved out of her home after he turned 18.

Weston Cage issued a statement through his father's lawyer last week saying he didn't want "anything to do with my mother."

"Any problems that I have ever had is because of the relationship that I had with my mother," his statement said.

That drew a quick retort from Fulton: "My son is under a spell. He's under a trance. Weston would say whatever his dad wants him to say." She suggested that Cage's lawyer solicited it from her son while he was under a psychiatric hold at Ronald Reagan UCLA Medical Center.

On Tuesday, Fulton said she would not be deterred from seeking control over her son.

"The right parent is not the most popular," Fulton said.

Earlier, Fulton called the quote, she called it "an absolute disgrace," suggesting that Cage's lawyer solicited a statement from her son while he was under a psychiatric hold at Ronald Reagan UCLA Medical Center.