(CNN) -- Ryan Dunn, one of the stars of MTV's "Jackass" films and TV series, was killed in a fiery car crash on a Pennsylvania highway early Monday, police said.

A passenger in Dunn's 2007 Porsche 911 GT3 was also killed, but investigators have not positively identified the body, according to the police report sent to CNN.

The red-bearded Dunn, 34, was famous for his pranks and dangerous stunts on the show, which evolved into a successful film franchise.

West Goshen, Pennsylvania, police were called to the wreck scene on State Route 322 at 2:30 a.m., the police report said.

"Upon arrival, police located one vehicle off the road and in the woods that was fully engulfed in flames," the report said.

"Speed may have been a contributing factor to the accident," police said, although the investigation is in its preliminary stages. 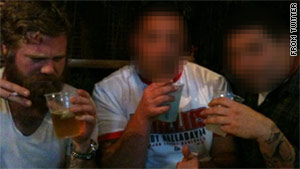 This photo of Ryan Dunn was posted on his Twitter account about two hours before the accident.

Dunn was driving the Porsche, which was registered in his name, police said.

A photo of Dunn was posted on his Twitter account about two hours before the wreck showing him with a drink in his hand. Two men sitting with Dunn in the photo are not identified.

The manager of Barnaby's in West Chester, Pennsylvania, confirmed that the photo was taken in his bar Sunday night. The bar is about a mile away from where Dunn was killed in a car crash.

Manager Jim O'Brien confirmed that Dunn was drinking there.

"He didn't seem to be intoxicated at the time he left," O'Brien said. "Ryan was not a hardcore drinker, at least not when he was here."

O'Brien said Dunn was a regular customer and well known to his staff.

"He was a valuable person in our community and his death is a tragedy," O'Brien said. "He will be missed."

MTV issued a short statement through its Twitter account Monday morning: "We're deeply saddened by the passing of a member of the MTV family, Ryan Dunn. Our hearts and thoughts are with his friends and family."

"Jackass" star Johnny Knoxville tweeted his message Monday morning: "Today I lost my brother Ryan Dunn. My heart goes out to his family and his beloved Angie. RIP Ryan, I love you buddy."

Dunn teamed up with "Jackass" co-star Steve-O for an episode of the NBC game show "Minute to Win It" that aired on June 8.

He also hosted "Proving Ground," which premiered on the G4 channel on June 14.