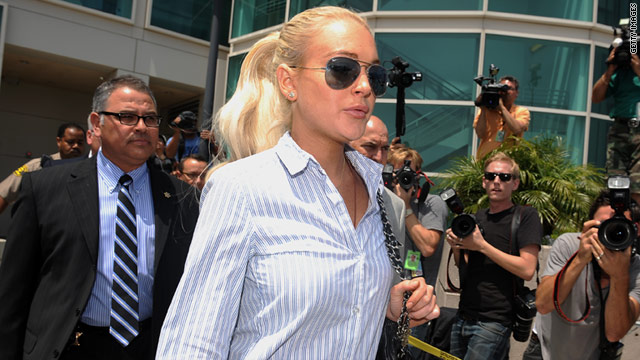 Los Angeles (CNN) -- Lindsay Lohan was released from home confinement at 10:20 a.m. Wednesday, 35 days after she began serving her sentence for misdemeanor theft and probation violation, a spokesman for the Los Angeles County sheriff said Wednesday.

The electronic monitoring bracelet was removed from Lohan's ankle about 40 minutes before she was officially freed, spokesman Steve Whitmore said.

The actress was sentenced last month to 120 days in jail after she entered a guilty plea to stealing a necklace from a jewelry store in January. The judge had earlier sentenced her to the same jail term for violating her probation by being arrested in the theft case.

The four months in jail translated into five weeks in home confinement because of jail overcrowding and state rules that allow for credit for good behavior for prisoners, Whitmore said.

"I am not happy about house arrest," Los Angeles County Superior Court Judge Stephanie Saunter said during a hearing last week. "It was not my sentence."

Lohan must now resume work on the 480 hours of community service ordered as part of her sentence, including 360 hours at the Los Angeles Downtown Women's Center. The last 120 hours will be served at the county morgue. Judge Saunter gave Lohan a year to complete the community service.

Her supervised probation is scheduled to end within a year, unless Lohan is charged with breaking any laws before then. It has been extended several times because of probation violations, including failed alcohol and drug tests.

Lohan failed an alcohol test administered by a probation officer on June 13 and was ordered to go before the judge for a probation violation hearing last week. But Lohan's attorney convinced the judge the testing requirement had lapsed in February. Judge Saunter ruled that Lohan is now allowed to drink alcohol and she is no longer required to take random drug tests.

The actress, who turns 25 on July 2, has managed to avoid more than a few days in jail despite two drunken-driving convictions, a long list of probation violations and the recent theft conviction.

"Because of budget constraints and because we're under a federal consent decree that requires us to curb our overcrowding situation, nonviolent offenders, lesser crimes, get 20% of their sentence," Los Angeles County Sheriff's spokesman Steve Whitmore said.

Lohan entered drug rehab last year to avoid a jail sentence imposed by another judge. But Saunter made it clear in court last month that she didn't think drugs and alcohol were the root of Lohan's legal troubles.

"She's got other problems for which she self-medicates," Saunter said at her sentencing in May.

Lohan's four years in and out of court -- and sometimes jail -- started with two drunken-driving arrests in 2007. Since then, she's spent more than eight months in substance-abuse rehabilitation programs.

A probation report released last month said the actress "appears to be continuing to struggle with substance abuse issues."