Friends and family among mourners at Amy Winehouse funeral 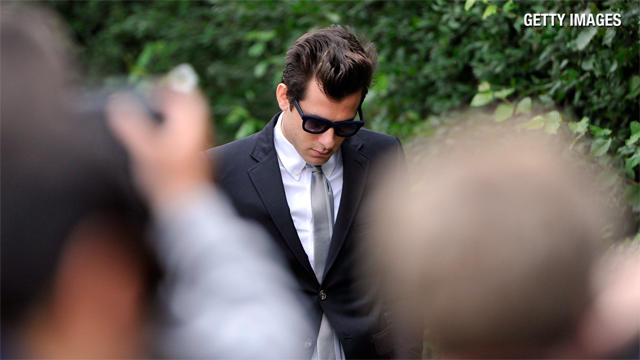 London (CNN) -- Amy Winehouse "was the happiest she has been for years," with a new love and renewed determination to overcome her drug addiction in her last weeks, he father said in a statement Tuesday as family and friends gathered for the singer's funeral in London.

Record producer Mark Ronson, who worked with Winehouse on her Grammy-winning album "Back to Black," was among the mourners at the funeral, according to CNN affiliate ITV.

But the singer's ex-husband, Blake Fielder-Civil, was not released from prison to attend the memorial, a source familiar with the situation said. He is serving a 32-month sentence for burglary and possession of an imitation firearm, according to media reports.

Sparse details are being released about the ceremony though Winehouse spokesman Chris Goodman described it as "a small, private event for a few friends and family."

Investigators might not know what killed Winehouse until they get results from lab tests on her blood and tissue, due in two to four weeks, according to London's Metropolitan Police, also known as Scotland Yard.

An autopsy was completed at St. Pancras Mortuary on Monday afternoon, two days after the singer was found dead in her London apartment.

Ashton: 'Winehouse could do anything'

Phillips: 'Winehouse just didn't get it'

Could anyone have saved Amy Winehouse?

"It did not establish a formal cause of death and we await the results of further toxicology tests," a police statement said.

An inquest into her death was opened Monday, the statement said.

Her father, in his statement Tuesday, said his daughter had made a "fantastic recovery" as "recently Amy found love with Reg (Traviss.)"

"He helped her with her problems and Amy was looking forward to their future together." Winehouse said. "She was the happiest she has been for years."

He wrote of a "great night" with his daughter recently at London's 100 Club when "her voice was good, her wit and timing were perfect."

"She told me that she had 'thoroughly, thoroughly enjoyed herself,'" her father said. "The last time she called me she had found a box of old family photos and called me to go over to look. We spoke three times a day at least, she was very excited."

Winehouse "was trying hard to deal with her drinking and had just completed three weeks of abstinence," he said.

"She said, 'Dad I've had enough, I can't stand the look on your and the family's faces anymore,'" he said.

Her boyfriend and mother told him Winehouse was "in good spirits" and not depressed when they saw her Friday, a day before her death. "That night, she was in her room, playing drums and singing."

"As it was late, her security guard said to keep it quiet and she did," Mitch Winehouse said. "He heard her walking around for a while and when he went to check on her in the morning, he thought she was asleep. He went back a few hours later, that was when he realized she was not breathing and called for help."

The singer, beloved for her talent but infamous for erratic public behavior, arrests and drug problems, was found dead Saturday afternoon in her London apartment.

Winehouse's soulful, throaty vocals brought the British musician stardom in 2007, but her troubled off-stage life -- chronicled in her Top 10 hit "Rehab" -- won her notoriety. Her death came less than two months after her latest release from a rehabilitation program and weeks after she was booed offstage by disappointed fans in Belgrade, Serbia.

Winehouse died at the same age as at least four other music legends. Jimi Hendrix, Janis Joplin and Jim Morrison each died of drug overdoses when they were 27. Kurt Cobain was 27 when he committed suicide, soon after his release from rehab.

Police were called to Winehouse's Camden Square apartment just after 4 p.m. Saturday in response to a report of "a woman found deceased," authorities said.

Her song "Rehab," in which she sang "They tried to make me go to rehab, I said no, no, no," helped form the public's view of Winehouse. She told CNN in a 2007 interview, "I don't care enough about what people think of me to conform to anything."

The London-born singer was a tattooed teenage rebel after she was expelled from a prestigious performing arts school. Her first album, "Frank," debuted in 2003, when the singer-songwriter was 19.

International success came with her 2007 album "Back to Black." She dominated the 2008 Grammys, winning five awards that night and delivering, via satellite from London, a strong performance of "Rehab."

Winehouse's volatile marriage to Fielder-Civil took a toll on the singer's career. The couple divorced in 2009 after a stormy two years filled by drug addiction and arrests.

Winehouse's parents went public with their efforts to help their daughter, telling the London Telegraph in 2009 that she was on the road to recovery.

"A gradual recovery, which is good," Winehouse's father told the Telegraph. "With slight backward steps -- not drug backward steps, more drink backward steps if you follow my drift. I think that will be the pattern of recovery."

The organization that awards the Grammys issued a statement Saturday calling Winehouse "a dynamic performer and musician who seamlessly blended rock, jazz, pop, and soul and created a sound all her own."

"Her rich, soulful and unique voice reflected her honest songwriting and earned her a devoted fan following, critical acclaim, and the genuine respect and admiration of her musical peers," the Recording Academy statement said. "She will forever be remembered for her immense talent, and her music will live on for generations to come. Our deepest sympathies go out to her family, friends, and fans during this difficult time."