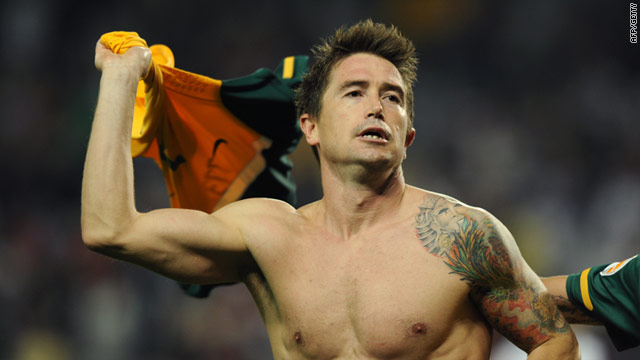 Harry Kewell's late goal for the Socceroos sunk the holders Iraq in the quarterfinals.
STORY HIGHLIGHTS

(CNN) -- Harry Kewell scored a dramatic extra-time winner as Australia beat holders Iraq 1-0 in the quarterfinals of the Asian Cup in Doha Saturday.

The Socceroos will now take on Uzbekistan for a place in Saturday's final in Qatar.

Kewell, who now plays for Galatasaray in Turkey, headed a cross from Matt McKay past Iraqi goalkeeper Mohammed Kassid to settle a tense encounter.

We showed great character in this game. It was delightful for the coach to watch
--Holgier Osieck
RELATED TOPICS

Victory was sweet revenge for the Australians, who were beaten 3-1 by eventual winners Iraq in the group stages of the competition four years ago.

Chances were few and far between in the first half of normal time, although McKay and Kewell came close just before the break.

But in the second half, the Lions of Mesopotamia started to roar and Emad Mohammed hit the post with Mark Schwarzer beaten.

Into extra-time, it was Australia who looked the more likely to make the breakthrough with Sasa Ognenovski nearly scoring with a spectacular overhead kick.

Penalties were looming though when 32-year-old Kewell cropped up to score the vital goal to send Holgier Osieck's men through.

"We showed great character in this game. It was delightful for the coach to watch." he told AFP.

"Basically, we should have done it in the regular 90 minutes. Iraq played better in extra time."

Meanwhile, South Korea beat Iran 1-0 in in the later quarterfinal, again after extra-time, to set up a last-four meeting with Japan.

South Korea dominated for most the match but created few clear-cut chances at the Qatar Sport Club stadium.

However, a goal from South Korean midfielder Bit Ka Ram Yoon in the 105th minute was enough to knock out the three-time champions.

Both semifinals are scheduled to take place on Tuesday.