Packers and Steelers to face off in Super Bowl XLV 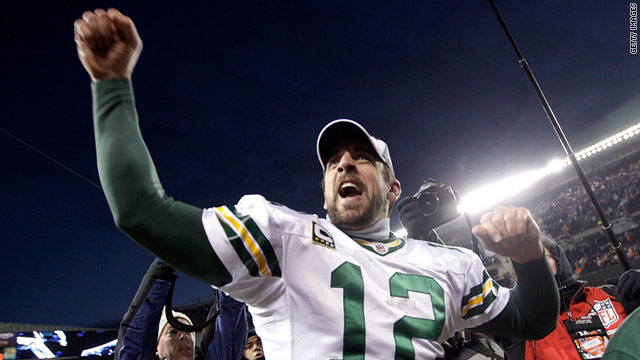 The Packers beat the Chicago Bears 21-14 to claim the NFC title, with the Steelers joining them in grid-iron's showpiece game with a later 24-19 defeat of the New York Jets to claim the AFC honors.

The pair will meet at the Dallas Cowboys Stadium in Texas on Sunday February 6 with the Packers playing their first Super Bowl in 13 years.

"This is a dream come true, incredible feeling. I am at a loss for words," Packers quarterback Aaron Rodgers told the official NFL website.

This is a dream come true, incredible feeling. I am at a loss for words
--Aaron Rodgers

Berman:'Two best teams made the game'

Rodgers scored a touchdown on the first drive of the game and B.J. Raji later crossed on a 18-yard interception return to put Green Bay 21-7 ahead.

Chicago's starting quarterback Jay Cutler struggled to make any impression as he was hampered by a knee injury.

Third string Caleb Hanie took up the mantle and set up Chester Taylor for their first touchdown, but it was his mistake that allowed lineman Raji to lumber into the endzone.

Hanie then picked out Earl Bennett to cut Green Bay's lead to seven points with nearly five minutes left on the clock, but he was again intercepted and the Packers held on.

The Steelers, inspired by quarterback Ben Roethlisberger, later sealed their third visit to the Super Bowl in eight years and eighth overall, but like the Packers had to survive nervous late moments.

Rashard Mendenhall, who ran for 121 yards, scored their opening touchdown with Roethlisberger and William Gay also crossing as they built a 24-0 lead.

The Jets battled back behind their star quarterback Mark Sanchez, who threw a pair of second half touchdown passes, the latter to Jerricho Cotchery that pulled them to 24-19 with just over three minutes left.

But Roethlisberger made sure the Steelers kept their lead as he connected with Heath Miller and Antonio Brown to seal a memorable victory.