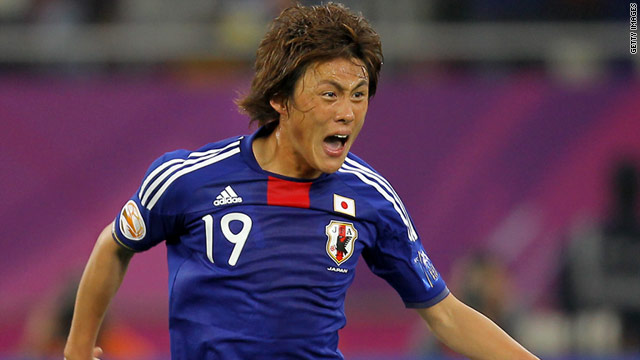 A volleyed goal from substitute Tadanari Lee in the second half of extra time earned Japan a 1-0 victory over Australia and a record fourth Asian Cup Saturday.

The Socceroos had twice gone close with Everton's Tim Cahill having an effort cleared off the line and winger Harry Kewell firing straight at goalkeeper Eiji Kawashima when clean through on goal.

But Alberto Zaccheroni's "Blue Samurai" weathered the storm to add to their previous triumphs in 1992, 2000 and 2004 as Lee proved their hero.

"It is a great victory. We have a really great team," Zaccheroni told AFP.

"They were united and won the title against such strong opponents," added the Italian.

"I knew he would do it. What is great about this team is that players, who started on the bench, could produce results on the pitch."

The triumph secures Japan an automatic place at the 2013 Confederations Cup in Brazil -- a warm-up for the World Cup proper a year later.

Australia had only conceded once in the competition before the final and goalkeeper Mark Schwarzer, who became his country's most capped player with his 88th appearance, easily dealt with Keisuke Honda's effort in the first half.

It was Osieck's side, appearing in only their second Asian Cup, who looked the more dangerous and they struck the woodwork early in the second half through Luke Wilkshire's cross that became a shot.

Japan hit back when the lively Nagatomo provided a delivery for Shinji Okazaki, whose header drifted narrowly wide of the post.

With 20 minutes left Kewell spurned his chance when one-on-one with Kawashima and as the game drifted towards extra-time, Japan started to take control.

After 109 goalless minutes and with the match headed for penalties, Lee fired the telling blow to spark scenes of wild celebration on the Japan bench.

"You can imagine how disappointed we are to come second because we had our opportunities. Unfortunately, we couldn't convert them," he told AFP.