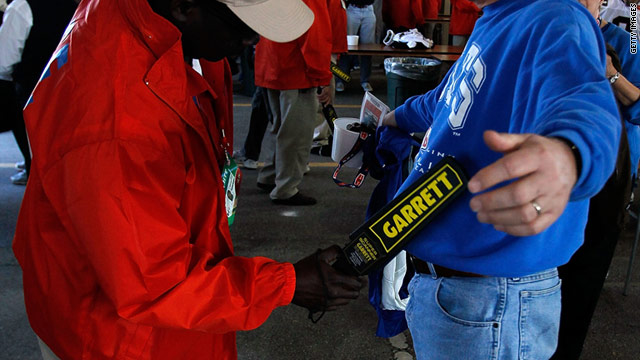 Those attending the Super Bowl can expect airport-level screening, including magnetometers and pat-downs.
STORY HIGHLIGHTS

Arlington, Texas (CNN) -- The teams are in Texas, practicing and mentally preparing for game day. Not the Green Bay Packers or the Pittsburgh Steelers, but the dozens of security teams that have been brought in from all over the country to keep the Super Bowl safe.

With more than 100,000 people expected to attend the game, and an estimated worldwide television viewership of 110 million, the Super Bowl could be a tempting terror target. Though officials say there is no specific, credible information indicating there is a threat to the game, they have spent more than two years planning its protection.

Jerry Jones, the owner of the Dallas Cowboys, says he spent millions of dollars building security into the stadium where the game will be played.

"In these current times you would be shortsighted, really, not to have gone to the nth degree to design security and security equipment and security areas ... and this stadium represents that," Jones says.

One family key to Steelers win?

There are perches for law enforcement snipers, according to Jones, and a system of surveillance cameras that can record almost every inch of the stadium. Multiple entrances also help to facilitate faster security screening and faster evacuation, if necessary.

People attending the Super Bowl can expect the kind of screening they might get at an airport, including magnetometers and pat-downs. Large items like backpacks are banned, as are camera and binocular cases, and umbrellas.

During the game the airspace for a 30-mile radius over the stadium will be restricted and patrolled by NORAD fighter jets.

Teams from the National Nuclear Security Administration will rove the city with equipment to detect radioactive isotopes that could be emitted by a dirty bomb. NNSA's Debbie Wilber says the administration's sensors picked up 10 hits at the 2010 Super Bowl. Every one turned out to be harmless -- the result of nuclear medicine.

Though much of the security on Super Bowl Sunday will not be visible, a recent media day showcased the resources that will be on hand: chemical and biological detection devices, bomb-retrieving robots, high-tech weaponry, and even a small unmanned aerial vehicle equipped with a camera that could fly inside the stadium if necessary.

The NFL estimates the price tag for securing the game is $10 million. The NFL will pick up half.

The recent Tucson shootings and a rash of homegrown terror incidents have heightened concerns about the possibility of an attack by a so-called lone wolf. To help counter that possibility, Homeland Security Secretary Janet Napolitano and the NFL launched the latest "If You See Something Say Something" campaign this week. It encourages the public to report suspicious activity.

The campaign slogan will be displayed during the game on huge video boards over the field. Public service announcements are also prominently displayed at the Dallas/Fort Worth International Airport and on the local DART transit system.

James Spiller, chief of the DART police department, says he is still anxious.

"The biggest concern always is that people see something and don't say anything. We need their input to let us know what is happening," he said.

Napolitano toured Cowboys Stadium this week and met with federal, state and local officials. Afterwards, she declared, "Security here is great. The planning is thorough."

Among those who will be at the game Sunday: officials in charge of security for the 2012 Super Bowl. Their planning is already well under way, though the first game of the season is still months away.