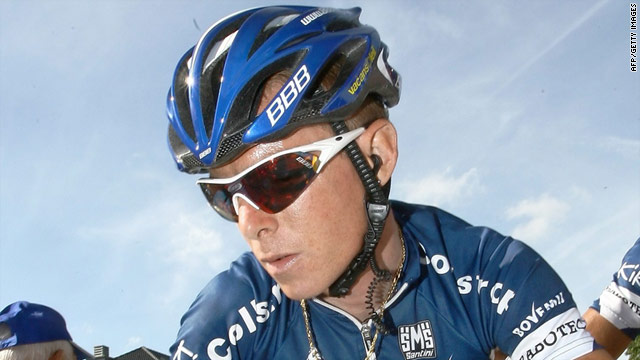 Riccardo Ricco is reported to have told doctors that he gave himself a blood transfusion prior to falling ill on Sunday.
STORY HIGHLIGHTS

(CNN) -- The Italian Olympic Committee (CONI) have confirmed they are to investigate the circumstances surrounding cyclist Riccardo Ricco's admission to hospital over the weekend, amid reports the 27-year-old told doctors he had given himself a blood transfusion.

In a brief statement, CONI said: "Based on press reports, we have opened disciplinary proceedings against professional cyclist Riccardo Ricco."

Vacansoleil rider Ricco -- who only returned to the sport last March after being handed a 20-month ban for doping during the 2008 Tour de France -- was admitted to a hospital in Modena on Sunday.

His father told reporters that Ricco had been suffering from a high fever and suspected kidney failure.

However, Dutch-based Vacansoleil released a statement which read: "It has been reported that Riccardo Ricco has admitted to doctors that he performed a blood transfusion on himself, resulting in him being hospitalized with a high fever.

"The team has insufficient knowledge of all the relevant facts to have a balanced opinion on this issue.

"However, we have a zero-tolerance policy on doping and any riders who violate our internal and international rules on doping will be sacked.

"We have started our own investigation into the facts and will comment further once the results of this research have been determined."

Blood doping -- an action that increases the amount of red blood cells available to carry oxygen to the muscles -- has been a problem in cycling for a number of years, with disgraced 2006 Tour de France winner Floyd Landis admitting last year that he blood-doped during his career.

Blood cells are not damaged by freezing, consequently a "blood doper" can remove blood from their body, safely store it, and re-inject it when increased aerobic capacity and stamina is needed.

However, if the blood is stored incorrectly, it can become infected, resulting in severe illness if transfused.

The practice of blood doping is banned by all official sporting governing bodies and Ricco now faces expulsion from competitive cycling if found guilty, as well as a possible jail sentence in a country where all forms of doping are classed as illegal.

Ricco has yet to react to the allegations surrounding his hospital stay.

Meanwhile, triple Tour de France winner Alberto Contador has appealed against his positive test for the anabolic agent clenbuterol -- on the grounds that he was not responsible for the drug being in his body.

Contador's urine tested positive for a small quantity of the drug during the Tour's second rest day on July 21.

However, the Spaniard has consistently maintained that the presence of the drug could only have been due to his eating contaminated meat.

Contador is appealing against a one-year ban proposed by the Spanish Cycling Federation, under a clause which states that an athlete can escape a ban if he "establishes that he bears no fault or negligence".

The Spanish federation will make a final decision on its initial ruling later this week after which Contador, the International Cycling Union and the World Anti-Doping Agency have the right to appeal to the court of arbitration for sport (CAS).