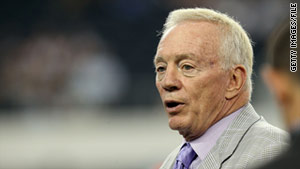 (CNN) -- One of the Dallas Cowboys' major donors is a named plaintiff in a class action lawsuit, seeking more than $5 million, over unavailability of seats at Super Bowl XLV, according to documents filed Monday at a U.S. District Court in Texas.

About 1,250 fans with tickets were affected in the seating fiasco, which came about because certain sections of Cowboys Stadium that were being added in an effort to boost attendance weren't ready by game time. About 850 of the fans were relocated to other seats, and some 400 weren't, the NFL said.

Mike Dolabi of Tarrant County, Texas, who is one of the "Founders" of Texas Stadium who paid a minimum $100,000 per seat to help pay for the state-of-the-art venue's construction, was one of the named plaintiffs in the class action. Dolabi and others had been assigned to "seats with obstructed views and temporary metal fold-out chairs" that "lacked any reasonable view of the stadium's prized 'video board,' which defendant Jones and the Cowboys routinely claim is one of the most unique and best features of Cowboys Stadium," the lawsuit says.

The lawsuit also notes that the Cowboys and the NFL knew that a problem with seating was unfolding in the days before the Super Bowl but did not notify ticket-holders that there might be a problem.

Jones and NFL President Roger Goodell on Monday both apologized to fans affected by the seat shortage. Also, the league promised to give a free ticket to next year's Super Bowl and a refund of triple the cost of the $800 face value of the ticket to each of the 400 fans denied seats -- or a free ticket to a future Super Bowl game of the fan's choice, plus round-trip airfare and hotel accommodations. Fans can pick the option they want.

Not good enough, the plaintiffs say: "(T)his monetary sum is wholly insufficient to compensate plaintiffs for all of their expenses, including but not limited to travel costs, or of their disappointment and frustration in not being able to properly enjoy the Super Bowl."