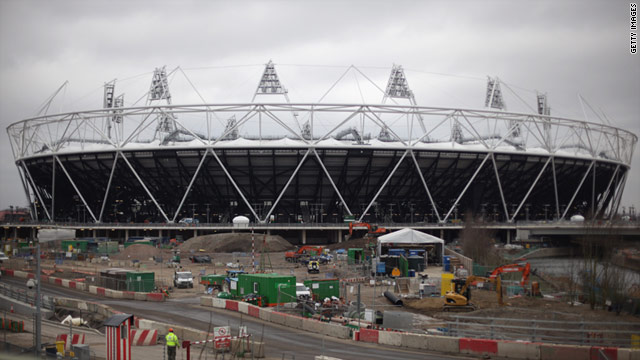 West Ham are a step closer to becoming tennants of the London Olympic Stadium after the 2012 games are over.
STORY HIGHLIGHTS
RELATED TOPICS

(CNN) -- The stadium at the heart of the 2012 London Olympics is set to be transformed into a football ground once the Games have finished, after English Premier League side West Ham were named as the preferred future residents of the venue on Friday.

The 80,000 capacity stadium will replace nearby Upton Park as West Ham's home but will retain its capability to host athletics events thanks to a commitment from the east London club to keep the running track in place.

The decision ends a period of jostling between West Ham and -- Premier League and London rivals -- Tottenham Hotspur, who were also hoping to relocate to the arena after the Olympics.

Spurs proposed rebuilding a 60,000-seater, football-only venue on the same site but the plan failed to convince the Olympic Park Legacy Company (OPLC) who decide on the future use of the location.

We have made a unanimous recommendation to back West Ham. This represents the very best legacy for the stadium
--Olympic Park Legacy chairwoman, Margaret Ford

"We have made a unanimous recommendation to back West Ham as the long-term tenant," OPLC chairwoman Margaret Ford said at a press conference.

"This represents the very best legacy for the stadium and for the communities of east London, and is a really good outcome for sport," she added.

The British government still have to finalise the confirmation of West Ham as tenants, but it is expected that they will do do in the coming weeks.

The soccer club maintained it was their promise, to retain the stadium's running track in line with the policy of 2012 organizers to leave an athletic legacy in the area, that helped clinch the decision.

"Today is a momentous day. We are proud to have been passed the Olympic torch and fully embrace the responsibility we have for keeping the flame alive," the club's vice chairman Karen Brady told their official website.

Today is a momentous day. We are proud to have been passed the Olympic torch and fully embrace the responsibility we have
--West Ham vice chairman, Karen Brady
RELATED TOPICS

"We have been working on this project for some time now and are just at the starting line of the race to make this a stadium that will really make the nation proud."

The news is a blow for fifth-placed top flight side Tottenham, who had wished to expand beyond their current facilities at White Hart Lane, with the financial help of American entertainment firm AEG.

"The Olympic Stadium site is an essential element in the creation of a viable Olympic Park and we know that we provided a first class proposal to support the sustainability of the whole project," a statement on their website read.

Should the move become official, however, it is not the first time a Premier League club will have taken over an athletics stadium.

Manchester City moved from their Maine Road ground to the City of Manchester Stadium -- the venue for the 2002 Commonwealth Games -- to capitalise on its 48,000 all-seater facilities.

Elsewhere in Europe, Barcelona's 1992 Olympic Stadium was La Liga side Espanyol's home ground from 1997 to 2009, while Serie A club's Lazio and Roma share the use of Rome's 1960 Stadio Olympico.

And in Berlin the 74, 500 capacity Olympicstadion -- built for the Olympics held in the city in 1936 -- is home to German second division side Hertha BSC. It also played host to matches in the 1974 and 2006 World Cups.