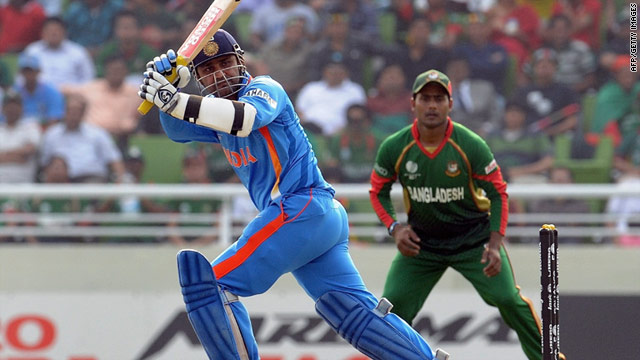 (CNN) -- Virender Sehwag smashed a career-best one-day innings of 175 as India opened the 2011 Cricket World Cup with a convincing 87-run victory over co-hosts Bangladesh in Dhaka on Saturday.

Opening batsman Sehwag put on 203 for the third wicket with Virat Kohli, who was unbeaten on 100, as India compiled 370-4 in the allotted 50 overs -- the fifth-highest total in tournament history.

Bangladesh made a game effort in reply but could manage only 283-9, crucially losing five wickets while scoring just 47 runs in the final 10 overs of the match.

Sehwag, who hit 14 boundaries and five sixes in his 140-ball knock, matched the 175 not out by compatriot Kapil Dev in 1983 which is the fourth-highest score in World Cup matches.

"It was a good start for the team, I have said this is a revenge game and we have won," the 32-year-old told reporters.

Special thanks to my physio for helping me, I was carrying a couple of injuries and they got me ready for this game
--Virender Sehwag
RELATED TOPICS

"I have said before Bangladesh are not good in Tests, but they can compete in ODIs -- but today they could not. Special thanks to my physio for helping me, I was carrying a couple of injuries and they got me ready for this game."

After Bangladesh won the toss and chose to field, Sehwag opened the Indian innings with veteran Sachin Tendulkar -- the sport's highest scorer in one-day and Test formats -- who scored 28 from 29 balls before being run out.

Girls got game in cricket-crazy Bangladesh

Gautam Gambhir, who usually opens for India in five-day Tests, made a run-a-ball 39 before falling at 152-2 in the 24th over, bringing Koli to the crease.

The 22-year-old reached three figures for the fourth time in one-day internationals, needing only 83 deliveries as he hit eight fours and two sixes.

Bangladesh looked well-placed at 188-2 but then opener Tamil Iqbal fell for his team's top score of 70 as the second of Munaf Patel's four wickets.

And when captain Shakib Al Hasan was caught in the deep by Harbhajan Singh for 55 off 50 balls in the 40th over, it signaled the end of the home team's resistance.

Spinner Harbhajan picked up a wicket and a runout, while Patel finished with figures of 4-48 off his 10 overs to give India a winning start to their Group B campaign.

The Group A schedule begins on Sunday as New Zealand take on African minnows Kenya in Chennai, India, and the third of the tournament's hosts Sri Lanka play Canada.