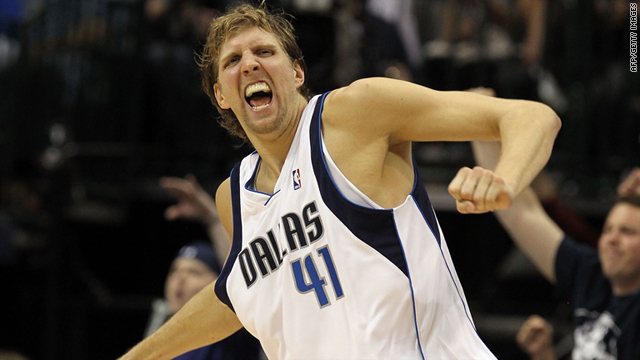 Dirk Nowitzki, aka the "Dunking Deutschman," celebrates after scoring for the Dallas Mavericks during the 2010 NBA playoffs.
STORY HIGHLIGHTS

(CNN) -- Dallas Mavericks star Dirk Nowitzki is a 10-time NBA All-Star and the first European in history to receive the Most Valuable Player award.

Born into an extraordinarily athletic family, the 7-foot German dabbled in a variety of sports -- from tennis to soccer -- before finding his calling as a teen.

The 32-year-old power forward is now enjoying his 13th year in the NBA and has recently signed a contract worth $80 million over four years -- making him Germany's second highest paid sports star after F1 legend Michael Schumacher.

But Dallas is a long way from his small suburban hometown of Wurzburg, in the heart of Germany.

Dirk Nowitzki, also known as the "Dunking Deutschman," recently sat down with CNN's Terry Baddoo to talk about his Bavarian roots and his life on and off the court. An edited version of the interview follows:

CNN: How did your upbringing affect your life as an adult?

Dirk Nowitzki: My parents were big into sports. My dad was a handball player, and my mom played basketball -- so basically I was in the gym every day.

I played all kinds of sports when I was young: tennis, handball, basketball, some soccer. I focused on basketball when I was 16 or 17 and then came to the U.S. when I was 20.

CNN: Your parents must be very proud of you?

DN: They are my biggest fans. My mom gets so nervous still -- I mean I've been in this league for 13 years and she still can't watch games live. She gets so anxious and when I miss a shot, she's like: "What's wrong with him? Why's he missing?"

My dad never really played basketball, but now he's my biggest critic. I come home and he's says: "Why didn't you shoot there? Why didn't you drive?"

I never came here for the money. I came here to compete with the best players in the world
--Dirk Nowitzki, basketball star
RELATED TOPICS

CNN: What do you miss about Germany?

DN: Just my family really. Everything else nowadays you can get over the internet, like food and that sort of stuff. It's so cold in the winter there, so I'm glad I miss the whole winter time.

But, you know, when I don't see (my sister's) kids for like two to three months, they change so much, and you miss them a lot. That's really the only thing.

CNN: You must get a lot of love from German people?

DN: Germans are everywhere. Every time I'm on the road somewhere, somebody has a German sign, and Germans come here to visit me a lot.

Last year for the All-Star game that was here in Dallas, I had 20 to 25 people come and stay at my house. That was crazy.

Every summer I go home and play for the national team and have a lot of followers there so, yeah, they treat me great and hopefully it will continue like that for the last couple of years of my career.

CNN: You're the second highest-paid German athlete behind Michael Schumacher. How do you feel about that?

DN: It's really nice, I mean Schumacher is obviously the man. What is it -- he's won six championships? And now he finally has this huge comeback with Mercedes -- the German car. He's great.

But to me it was never about the money. It's nice to know that I'll never have to worry about money for the rest of my life once I retire, but really that's about it. I never came here for the money. I came here to compete with the best players in the world.

CNN: You're more than just a basketball player. Away from the game you play music?

DN: Instrument wise I'd been struggling with the saxophone for a long time. Then I had my teeth knocked out and I couldn't really bite on it anymore, so I quit that.

I started to play the guitar for a couple of years which was fun. I still bring it out once in a while, could bust out a couple of songs but I'm not very good at it.

CNN: You're always flashing a smile on court. Are you always so happy, or is that a misconception?

DN: Yeah I like to have fun, but sometimes I do get a little fired up that I have to calm myself down. Off the floor I'm really laid back, like nothing really fazes me too much. But on the floor I do get emotional and a little carried away.

However, I started playing when I was 13 to have fun with my teammates, and that never stopped. I enjoy traveling and having fun in the locker room with the guys. Life is too short to be miserable.

CNN: What are your remaining goals? Maybe a gold medal at the London 2012 Olympics?

DN: I think Olympics-wise, that was my big dream just to get there once -- and we did that in Beijing in 2008. I got to carry the flag for Germany and led my nation into the stadium which, to this day, is one of the greatest days of my life.

So to me, that chapter is kind of over and done with. I don't know if I could top that in any way.