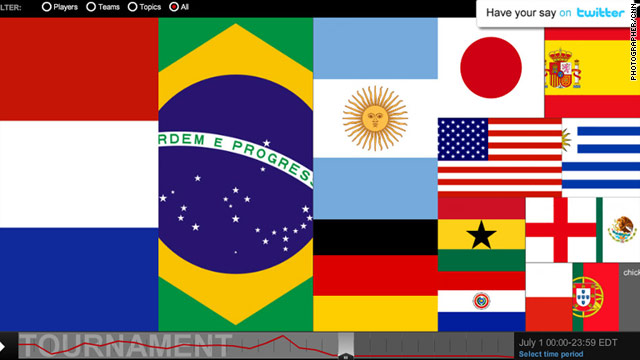 (CNN) -- A collaboration between Twitter and CNN during football's 2010 World Cup in South Africa has landed a top television award for innovation.

Tweets soared to a record high during the month-long competition, which was held in Africa for the first time, and in recognition of the new phenomenon, CNN created a data visualization tool to measure the activity.

CNN's Twitter Buzz was an interactive screen which reflected the Twitter traffic on a particular topic, usually a player or a team.

The more the topic was tweeted, the bigger the picture on the screen.

And there were often surprising results. On the first day of the tournament the word "Bees" filled the page, a reference to the unique sound of the vuvuzelas which filled every stadium.

South Africa 2010 was the first World Cup to be held since Twitter became one of the leading social media technologies and, at its peak, the interactive processed more than 13,000 tweets a minute when England played the United States in a group match on June 12.

In recognition of its success, CNN won the "Innovative News" category at the UK's Royal Televison Society (RTS) Awards.

The judges recognized that Twitter Buzz had given TV and internet viewers a unique insight into social media activity during the World Cup.

"It is very gratifying to win in the innovation category, which speaks so much to CNN's commitment to harnessing technology in unique and distinct ways," said Tony Maddox, CNN International Managing Director.

CNN previously won the same award in 2002 when its satellite telephone technology ushered in a new era of in-the-field newsgathering.