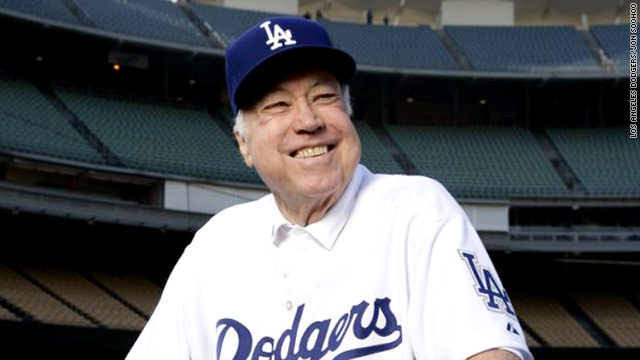 Duke Snider led the major leagues in home runs and runs batted in during the 1950s.
STORY HIGHLIGHTS
RELATED TOPICS

(CNN) -- Brooklyn and Los Angeles Dodgers Hall of Fame center fielder Donald "Duke" Snider died Sunday at a convalescent hospital in Escondido, California. He was 84, according to team officials.

Snider's career with the Dodgers spanned 16 seasons and included a half-dozen World Series appearances. Among them was the 1955 series, which the Brooklyn Dodgers won, as well as the 1959 series title, which Snider's team captured after moving to California.

A statement released by the Dodgers' organization described Snider as one of "the game's more feared hitters."

Snider led the major leagues in home runs and runs batted in during the 1950s. With a career total 389 home runs and 1,271 RBIs, the seven-time All-Star center fielder remains the Dodger franchise's all-time leader in both categories. He slugged four homers apiece in the 1952 and 1955 World Series.

Snider was nicknamed "Duke" by his father at age 5. The former high school baseball, football and basketball standout was inducted in to the National Baseball Hall of Fame in 1980 and his Dodger number 4 uniform was retired.

After retiring as a player, Snider returned as a minor league manager for the Dodgers. He later joined the Montreal Expos as batting coach and broadcaster.

"He was an extremely gifted talent and his defensive abilities were often overlooked because of playing in a small ballpark, Ebbets Field," said former Dodgers broadcaster Vin Scully, referring to the Dodgers' home in Brooklyn. "When he had a chance to run and move defensively, he had the grace and the abilities of (Joe) DiMaggio and (Willie) Mays and of course, he was a World Series hero that will forever be remembered in the borough of Brooklyn."