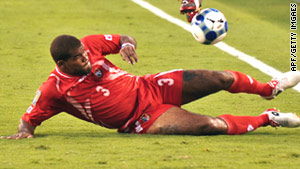 (CNN) -- Colombia's soccer officials announced Wednesday they will suspend a defender for the Deportivo Pereira for two games and fine him $560 for kicking an owl on the Junior Barranquilla home field on Sunday.

The bird, a mascot for the Junior Barranquilla team, had landed on the field during a game shortly before Luis Moreno trotted over to it and launched it aloft with his foot. It landed a few yards away. Monday, it died.

"The animal was practically a symbol for the Barranquillera fan and, given that the aggression occurred in their own stadium and in direct view of all the assistants, such an attitude can validly be interpreted as being within the range of public provocation that is regulated by the disciplinary code of the Colombian Football Federation," soccer officials said in a statement.

Newspaper reports quoted Moreno as apologizing for the act.