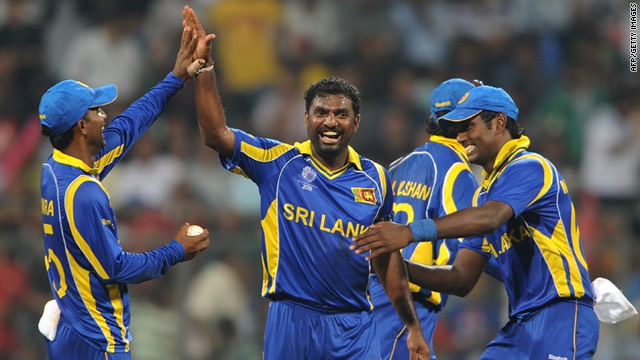 Both teams had already qualified for the quarterfinals of the 50-over tournament, but the highest-placed sides should avoid Group B heavyweights such as India and South Africa.

Sri Lanka's fourth victory in six games left the co-hosts above Australia on run differential, meaning they will finish second, with New Zealand a point back in third place.

The Australians, seeking a fourth successive title, complete their group campaign in Colombo on Saturday against fourth-placed Pakistan -- who have also qualified for the last eight and who could top the table with a win.

New Zealand restricted Sri Lanka to 265-9, with skipper Kumar Sangakkara top-scoring on 111 as he made his first World Cup century.

Sangakkara put on 145 for the third wicket with Mahela Jayawardene, who was controversially given not out in the 24th over when bowler Nathan McCullum dived to pluck a return catch.

Television replays showed that the Black Caps player had grasped the ball before it touched the grass, but umpire Asad Rauf told Jayawardene to stay at the crease after consulting with video official Amiesh Saheba.

Jayawardene went on to make 66 off 90 balls before becoming the second of Tim Southee's three victims, while McCullum struck twice as the last seven wickets fell for 101 runs.

In reply, the Kiwis reached 83-2 before suffering an all-too-common batting collapse, losing five wickets for 27 runs and eventually slumping to 153 all out in the 35th over.

Muralitharan, who turns 39 next month two weeks after the final, claimed figures of 4-25 off eight overs has he extended his world-record one-day total to 530.

He has now taken 64 wickets in World Cup matches, leaving him seven behind Australia's record-holder Glenn McGrath in his last tournament before retiring from international cricket.

In Friday's other match, Ireland beat the Netherlands by six wickets in Kolkata to clinch a second win in Group B.

The Irish, who shocked England earlier in the tournament, reached 307-4 with 2.2 overs to spare in the third-highest run chase in World Cup history.

He put on 177 for the opening wicket with captain William Porterfield, who scored 68, while Niall O'Brien was unbeaten on 57.

The Dutch had been hopeful of a first victory after posting 306, including a bizarre four run-outs in the final over, with Ryan Ryan ten Doeschate's 106 being his second century of the event.

On Saturday, Bangladesh play Group B leaders South Africa -- who have already qualified for the quarterfinals -- in Dhaka in a match the fifth-placed co-hosts need to win to go through.

The West Indies, above Bangladesh only on run differential, close out the schedule against India in Chennai on Sunday.