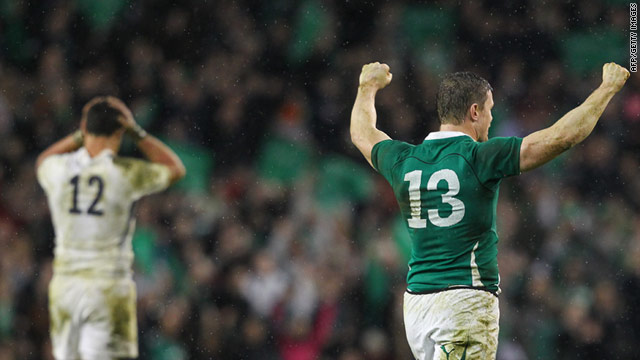 (CNN) -- England clinched rugby's Six Nations title for the first time since 2003 on Saturday despite crashing to a 24-8 defeat to Ireland in the final round in Dublin.

Martin Johnson's team could have been denied the crown along with the Grand Slam achievement of winning all five games, but closest rivals Wales lost 28-9 to France in the tournament's concluding match.

Johnson was captain of the England team that won the European competition for the 25th time eight years ago and then went on to lift the World Cup in Australia, and he will be hoping history repeats ahead of this year's premier event in New Zealand.

"This is a scar and we'll have to wear that scar. I told the players we'll take this on the chin. We were beaten by a good team, an experienced team," the coach said in quotes reported by the UK Press Association.

"The boys are very disappointed because they wanted to win a Test match, and we know what was at the end of it. We had a horrible first half. We were always chasing the game.

"It summed up our day up when two of our players ended up passing straight back to them. When you're in a fight you want to feel like you've landed a few blows, but we didn't. They kept on taking shots at us."

Recalled fly-half Jonathan Sexton kicked 14 points in a man-of-the-match performance, with his four penalties and a try from winger Tommy Bowe giving Ireland a 17-3 halftime lead.

When you're in a fight you want to feel like you've landed a few blows, but we didn't. They kept on taking shots
--England coach Martin Johnson
RELATED TOPICS

Seven minutes after the restart, captain Brian O'Driscoll became the record tryscorer in Six Nations history with his 25th crossing -- and Sexton converted to make it 24-3.

England's only try was a runaway intercept effort from hooker Steve Thompson, which fellow replacement Jonny Wilkinson could not convert.

Wales went into the match in Paris needing to win by 27 points to finish ahead of England on countback, but the team's preparation was marred by the absence of assistant coach Shaun Edwards due to a reported incident with a fellow member of the backroom staff last weekend.

Coach Warren Gatland refused to comment on the incident in his pre-game interview, saying that it was "an internal matter."

Wales' only reply was three penalties to flyhalf James Hook, who was sinbinned for a dangerous tackle, as Gatland's team finished fourth behind Ireland after three teams ended with six points each.

In the day's opening game, Scotland avoided the wooden spoon by beating Italy 21-8 in Edinburgh to condemn the visitors to bottom place.

The tournament has been known as the Six Nations since the addition of Italy in 2000, and started out in 1883 with four teams. France joined the competition for the first time in 1910, rejoining 37 years later.