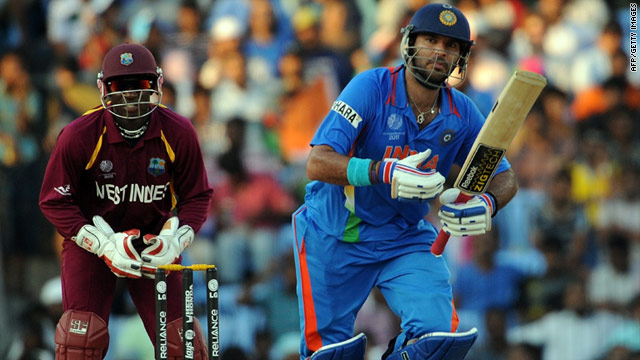 The victory meant India finished second in Group B, while Australia ended third in Group A after their 34-match unbeaten run at the 50-over tournament was halted by table-toppers Pakistan on Saturday.

The Windies, who had already qualified for the last eight before the concluding match of the round-robin stage, will play Pakistan in the opening knockout game in the Bangladeshi capital of Dhaka on Wednesday.

The Indians have home advantage in Ahmedabad the following day, then Group B winners South Africa take on New Zealand in Dhaka on Friday and Group A runners-up Sri Lanka host England in Colombo on Saturday.

Yuvraj Singh scored his first World Cup century as India posted a total of 268 at Chidambaram Stadium, being bowled out in the final allotted over.

I was very happy with the way it went. I was getting stomach cramps, but wanted to bat till the end
--Yuvraj Singh
RELATED TOPICS

He collected his third man-of-the-match award of the tournament after hitting 113 off 123 balls faced, adding 122 for the third wicket with Virat Kohli (59) and then later dismissing two West Indian batsmen with his left-arm spin bowling.

The 26-year-old fast bowler, who had played 50 one-day internationals before this call-up in place of Kemar Roach, made an impressive start as he dismissed India's opening batsmen Sachin Tendulkar (2) and Gautam Gambhir (22).

World record-holder Tendulkar had been seeking to score his 100th century at international level, but walked off after edging a rising delivery despite the umpire rejecting Rampaul's appeal.

The Windies, who would have faced Australia in the quarterfinals if they had won, made a solid start in reply but then suffered a batting collapse at 154-2 in the 30th over.

Khan ended with figures of 3-26, while limited-overs specialist Yuvraj chimed in with 2-18 in his 271st one-day international outing.

"When you lose early wickets, you need a partnership going. I was very happy with the way it went," the 29-year-old Yuvraj told reporters.

"I was getting stomach cramps, but wanted to bat till the end. Our batting is going well -- once we get the bowling and fielding going we should be okay."

In Sunday's earlier Group A concluder, Zimbabwe finished on a winning note by beating fellow minnows Kenya by 161 runs in Kolkata, meaning their fellow Africans ended the tournament without a win.

Zimbabwe scored 308-6 after batting first, with Craig Ervine top-scoring on 66 and Vusi Sibanda contributing 61, while Tatenda Taibu also made a half-century.

The Kenyans crumbled to 147 all out in 36 overs, as slow bowlers Ray Price, Greg Lamb and Graeme Cremer each claimed two wickets.