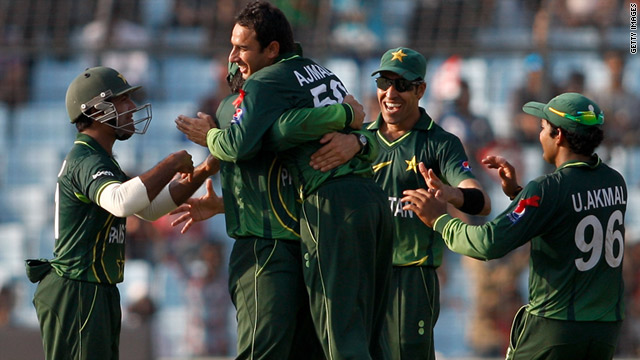 (CNN) -- Pakistan are through to the semifinals of the Cricket World Cup after crushing West Indies by 10 wickets in a one-sided last eight clash in Dhaka, Bangladesh.

Captain and leg-spinner Shahid Afridi inspired his Pakistan side to a superb fielding display, after the West Indies won the toss and elected to bat.

Afridi recorded figures of four wickets for 30 runs as the Windies crashed to just 112 all out in 44 overs -- their third-lowest score in World Cup history.

In reply, Hameez (61) and Kamran Akmal (47) cruised to the target with more than 29 overs to spare -- guiding Pakistan to their first World Cup semifinal since 1999.

At one stage, West Indies were in danger of making their lowest-ever World Cup total, when struggling on 71-8.

However, a 40-run partnership between Kemar Roach and Chanderpaul helped them better their worse score of 93 against Kenya in 1996.

The International Cricket Council (ICC) official website reported Ponting as saying: "I have never ever thought about retirement or where the finish line might be.

"I've been trying to prepare myself as best I can as a player and lead the team as well as possible. For some reason, these retirement things keep popping up all the time.

Australia will face India in an explosive-looking quarterfinal showdown in Ahmedabad on Thursday.