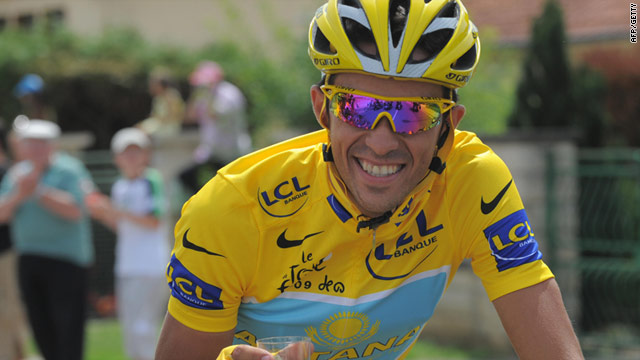 Contador celebrated a third Tour de France triumph but it was later revealed he had tested positive for a banned drug.
STORY HIGHLIGHTS
RELATED TOPICS

"The International Cycling Union today (Thursday) decided to appeal to the Court of Arbitration for Sport (CAS) in Lausanne against the Spanish Cycling Federation's (RFEC) finding in the case of Alberto Contador," read a statement on the UCI's official website.

"He was acquitted after testing positive for clenbuterol during an in-competition test carried out on 21st July 2010," it added.

The UCI's decision comes on the last available day they could refer the matter to the CAS, saying it had decided to appeal "after an in-depth study of the file received from the RFEC."

He was handed a provisional one-year ban by his own federation, but they rescinded that decision last month and cleared him to compete.

Contador, who is currently leading the Tour of Catalunya in Spain, has always protested his innocence, claiming that he had eaten contaminated meat.