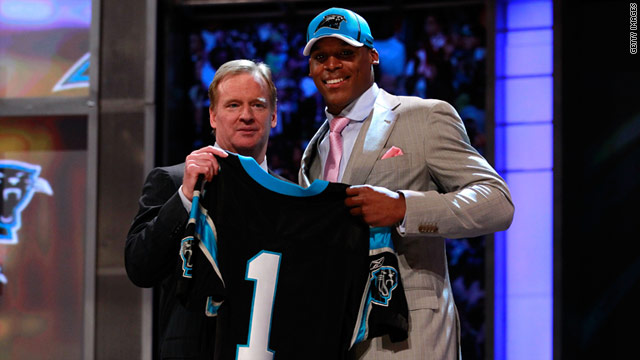 (CNN) -- The Carolina Panthers selected Auburn University quarterback Cam Newton as the first pick of the 2011 NFL draft on Thursday.

The Panthers were given first pick as a result of being the worst-performing franchise last season and had been widely tipped to opt for the 21-year-old.

The draft took place amid a dispute between NFL teams and players over pay rates.

Talks between the players and the teams over contracts broke down last month, resulting in the players union disbanding.

The dispute has brought the start of the NFL season, set to get under way on September 8, into jeopardy.

The Georgia native also won the Heisman Trophy, an award given to the best player in collegiate football.

"It was like a shock went through my body," Newton said on the official NFL web site. "I'm just blessed. ... I can't wait to get to my new hometown of Charlotte."

"He has special qualities," Panthers general manager Marty Hurney said. "We've had a strong feeling for some time that he was the person who we felt could come in and have the most impact on our football team."

Marcell Dareus, a defensive linesman from the University of Alabama, was selected third by the Buffalo Bills.

Wide receiver A.J. Green was picked fourth and will play for the Cincinnati Bengals, with Patrick Peterson, a corner back from Louisiana State University, selected by the Arizona Cardinals.