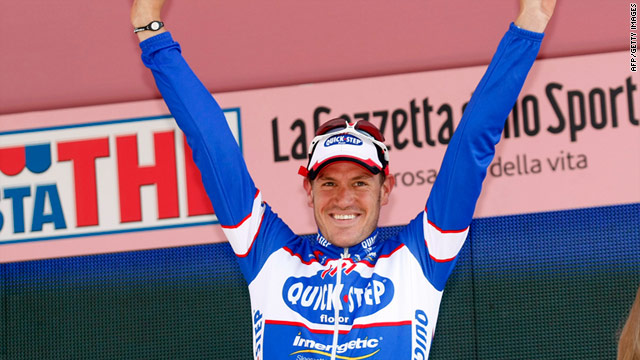 Weylandt enjoyed the biggest win of his career when victorious in the third stage of the 2010 Giro d'Italia.
STORY HIGHLIGHTS

(CNN) -- Team Leopard rider Wouter Weylandt of Belgium has been killed after a horror crash on the third stage of the Giro d'Italia.

The 26-year-old crashed on the descent of the Bocco mountain, 25km from the finish of Monday's 173km stage between Reggio Emilia and Rapallo.

Weylandt was attended to by medics, who administered cardiac massage following the incident, but he was pronounced dead from his injuries in the air ambulance on his way to hospital.

Race officials later claimed the rider's left pedal got stuck in a wall at the side of the road, resulting in him being catapulted off his bike and thrown over 20 meters along the road.

Team Leopard manager Brian Nygaard issued a statement on their official website, saying: "Our teammate and friend Wouter Weylandt passed away after a crash on the third stage of the Giro d'Italia.

"The team is left in a state of shock and sadness and we send all our thoughts and deepest condolences to all the family and friends of Wouter.

"This is a difficult day for cycling and for our team, and we should all seek support and strength in the people close to us."

British sprinter Mark Cavendish, who held the race leader's pink jersey on Monday, wrote on his Twitter page: "Things like this shouldn't happen. Absolutely sick to the stomach. My thoughts are with his family. RIP Wouter Weylandt."

And cycling legend Lance Armstrong also Tweeted: "Just back from a run and got the news of Wouter Weylandt's death today in the Giro. I'm shocked and saddened. May he rest in peace."

Weylandt joined the newly-formed Leopard team this season, after spending his career with the Belgian Quick Step squad since turning professional in 2006.

He enjoyed some success with Quick Step, notably taking a stage in the 2008 Vuelta Espana and ironically winning the same third stage of the 2010 Giro.

Weylandt is the first cyclist to lose his life in a racing crash since Kazakhstan's Andrei Kivilev died of head injuries following an accident in the 2003 Paris-Nice race.

In the 1995 Tour de France, Italian Fabio Casartelli, a teammate of Armstrong's at Motorola, was killed after crashing on the descent of the Porte d'Aspet in the Pyrenees.

And in 1986, Italian Emilio Ravasio died several days after crashing on the first stage of the Giro d'Italia.