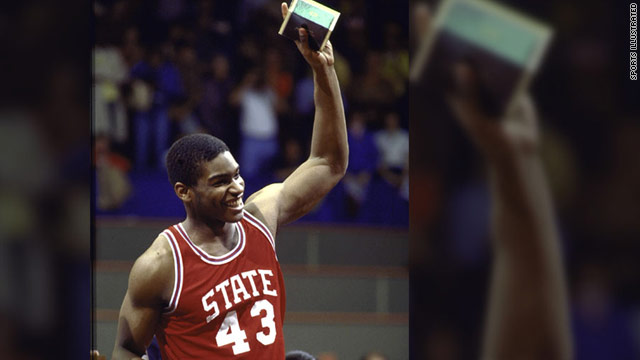 Check out CNN affiliate WRAL-TV in Raleigh for more information.

(CNN) -- Lorenzo Charles, who scored the winning dunk for North Carolina State in the 1983 NCAA national championship game and went on to play in the NBA, died in a bus wreck on Interstate 40 in Raleigh, North Carolina, Monday, police said.

There were no passengers on board the bus with him, according to Raleigh police spokesman Jim Sughrue.

"Lorenzo left an indelible impact in sports lore that will never be forgotten, and while he will be forever remembered for his accomplishments at North Carolina State, the Atlanta Hawks family would like to extend heartfelt condolences to the Charles family after the news of his tragic death," said Dominique Wilkins, the Hawks' vice president of basketball and a former teammate.

"He was a great guy who was loved by his teammates, and taken away from us far too soon."

Tire tracks at the scene showed the bus careened off the interstate, hitting branches and sustaining heavy damage to its front end, according to CNN affiliate WRAL-TV.

Charles, 47, had been a driver for Elite Coach, a limo, charter bus and car service, for 10 years, WRAL reported.