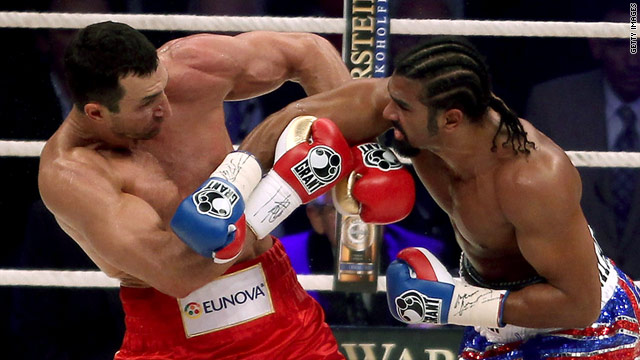 The giant Ukrainian retained his IBF and WBO versions of the title and claimed Haye's WBA crown after a polished display over 12 rounds in the Imtech Arena of Bundesliga side SV Hamburg.

It was the second defeat of 31-year-old Haye's 27-fight career, most of it at cruiserweight before stepping up a division for his last five fights.

The wily, 35-year-old Klitschko, who took his record to 56-3, used his extra weight and reach advantage to good effect as his jab kept his opponent at bay.

He managed to avoid Haye's desperate attempts to bring the fight to a swifter conclusion and scored the only knockdown of the fight in the 11th round, although the Briton was swiftly to his feet after what appeared to be a push.

The bout was held in heavy rain, the fighters largely protected by the design of the arena, but it would have doused the spirits of the large British contingent in the 45,000 crowd who had traveled to the northern German port city to cheer on their hero.

The victory leaves all the recognized versions of the world heavyweight boxing title with the Klitschko brothers, with Vitali holding the prestigious WBC version.

The pre-fight proceedings had been marked by animosity between both men, who had been due to fight two years ago until Haye pulled out with a back injury.

After the fight he revealed he had broken his right toe in training, but had decided to go ahead with the bout, which ultimately ended with a disappointing defeat.