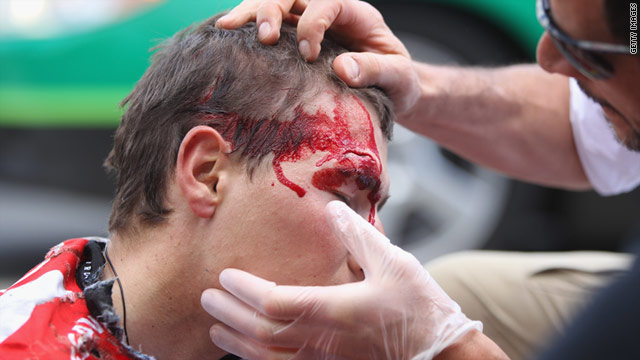 Janez Brajkovic is treated after crashing out of the fifth stage of the Tour de France. He later retired.
STORY HIGHLIGHTS

Cavendish, 26, a sprint specialist who has now won 16 stages of the Tour de France since 2008, edged what had been an eventful, crash-filled race.

Both Janez Brajkovic and defending champion Alberto Contador fell during the 164.5 kilometer stretch from Carhaix to Cap Frehel, the former being taken to hospital with head injuries.

The Slovenian later retired from the race altogether.

"I think what the organizers have done this year is to make it harder to have a proper bunch sprint. That's because we have been dominating in the last years," Cavendish, widely regarded as the best sprint cyclist in the sport, told the Tour de France's official website shortly after the race.

This year will be the 98th edition of the race, the most famous in cycling and one of the world's best known sporting events.

Cavendish, who was disqualified from an intermediate sprint in the third stage for illegally butting Hushovd -- who was also censured -- will find the next stage much harder: the sixth, 226.5 kilometer stage between Dinan and Lisieux is Le Tour's longest.

"That was a proper hard finish," Cavendish admitted.

"Those last couple of hundred meters my legs were going...I'm really happy with that."