Gay out until 2012 with hip injury 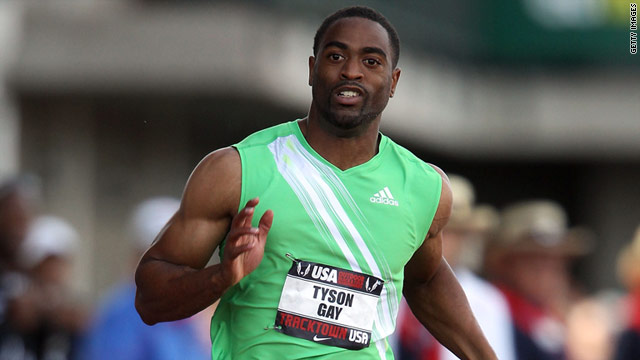 (CNN) -- American sprinter Tyson Gay will miss the remainder of the athletics season after undergoing surgery on a hip problem.

Gay, 28, will now miss the world championships in Daegu, South Korea, which are set to get under way on August 27.

The former 100 and 200 meters world champion had an arthroscopic procedure on Tuesday and will now focus on preparing for the 2012 season and the Olympic Games in London.

"Dr. Marc Philippon from the Steadman Philippon Research Institute in Colorado in the USA, performed an arthroscopic procedure to address an impingement in Tyson's right hip and to correct a labral tear that has been bothering him for some time," read a statement from Gay's manager on the IAAF web site.

"Dr. Philippon and his team will oversee Tyson's rehabilitation and believes Tyson will resume his normal base training in the fall as he prepares for 2012."

Gay -- who recorded the fastest 100m time this year when he ran 9.79 seconds in Florida in June -- was expected to be one of the main challengers to Jamaica's reigning world and Olympic champion over 100 and 200 meters Usain Bolt.

Kentucky-born Gay was forced to withdraw from the semifinals of the U.S. trials after recording a time of 10.01 secs in his heat.

The U.S. national record holder has also set the second and third fastest times ever over 100m, behind Bolt's world record of 9.58 secs.

The championships in South Korea will run until September 4.