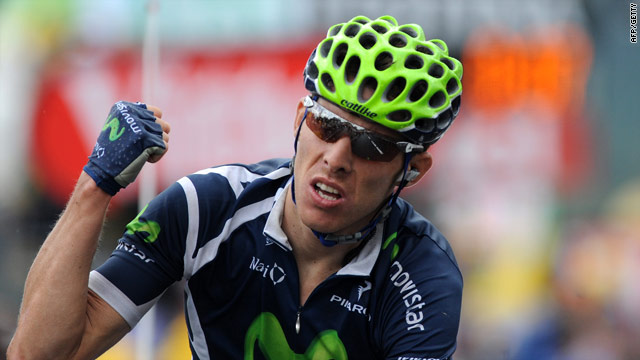 (CNN) -- Young Portuguese rider Alberto Rui Costa was rewarded for his bravery in taking part in a long breakaway as he won the eighth stage of the Tour de France in Super-Besse Saturday.

The 24-year-old was in a group which went away virtually from the start of the 189km leg from Aiguirande but still had the strength in an uphill finish to hold off the chasers.

Stage one winner Belgian Philippe Gilbert burst out of a whittled down peloton containing all the main yellow jersey contenders to finish 12 seconds behind Rui Costa.

As the breakaway group fragmented, Movistar's Rui Costa took advantage to pull clear, but he came under pressure from Astana's Alexandre Vinokourov who raced out of the peloton to catch all the early leaders bar the eventual winner.

Kazakhstan's Vinokourov got within 15 seconds of him, but then ran out of steam and was caught by the main group by the finish.

Norway's Thor Hushovd, who was expected to lose the yellow jersey on a tough stage in the Massif Central, upset predictions to cling on to the race lead by one second from Australian Cadel Evans.

Reigning champion Alberto Contador and last year's runner-up Andy Schleck were also prominent in the final 1.5km steep uphill drag to Super-Besse, but it was the impressive Evans of BMC who led them home, three seconds down on Gilbert.

Hushovd has been in yellow since his Garmin-Cervelo team won last Sunday's team time trial, but will come under pressure again on stage nine over similar testing terrain.