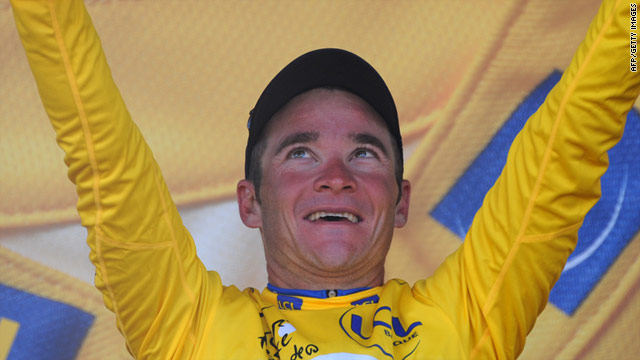 (CNN) -- Frenchman Thomas Voeckler has taken the yellow jersey from Norway's Thor Hushovd after a dramatic ninth stage of the Tour de France which was marred by a series of crashes which led to two of the race favorites pulling out.

Voeckler, who led the race for 10 days in 2004, finished second to Spain's Luis-Leon Sanchez at the end of the hilly 208km run from Issoire to Saint-Flour, which saw the riders tackle seven climbs in the Massif Central region.

Both Voeckler and Sanchez were members of a six-man breakaway group which formed at the 50km mark after a succession of attacks.

However, as the peloton began closing the gap on the six leaders, a huge pile-up on a descent at 102km saw a number of riders hit the ground at speed.

The 37-year-old Vinokourov, who had already announced his decision to retire at the end of the season, suffered a broken leg after tumbling a few meters down a ravine, while Van Den Broeck sustained a fractured shoulder blade.

When you only have two minutes on a rider like Cadel Evans in the overall, you have to be realistic
--Thomas Voeckler
RELATED TOPICS

Key Garmin domestique Dave Zabriskie was also forced to retire, to add to the list of riders that have crashed out of this year's race, which include Bradley Wiggins, Tom Boonen and Janez Brajkovic.

More drama was to follow when Team Sky's Juan Antonio Flecha, one of the breakaway riders, was clipped by an accompanying French TV car, sending him and Johnny Hoogerland flying, with Dutchman Hoogerland spectacularly going head-over-heels onto some barbed wire that surrounded a field on the side of the road.

Although both riders continued the race, eventually finishing well adrift of the peloton, their bloodied bodies indicated that they may not be on the start line for Tuesday's 10th stage following Monday's rest day.

Voeckler, who began the day in 19th place, now holds the race lead after finishing five seconds behind Sanchez, but nearly four minutes ahead of the peloton.

The Team Europcar rider lies 1:49 ahead of Rabobank rider Sanchez, who is 37 seconds clear of Cadel Evans in third place.

"When you only have two minutes on a rider like Cadel Evans in the overall, you have to be realistic," Voeckler told the official Tour de France website.

"I'm not a dreamer, I will just fight and give all that I can. I know it's impossible for me to keep the lead for 10 days like in 2004 but one thing is sure -- tomorrow I can keep the jersey because it's a rest day!" he added,

Hushovd's brave hold on the yellow jersey ended when he trailed home in 82nd place, 6:47 behind Sanchez, and he now lies 24th in the overall standings.

Defending champion Alberto Contador came home 12th, in the same group as the overall contenders, and continues to creep up the standings to 16th position overall.

However, the three-time winner was another to crash on Sunday and told reporters he was suffering from some pain in his knee, although he will have time to rest it on Monday's rest day.