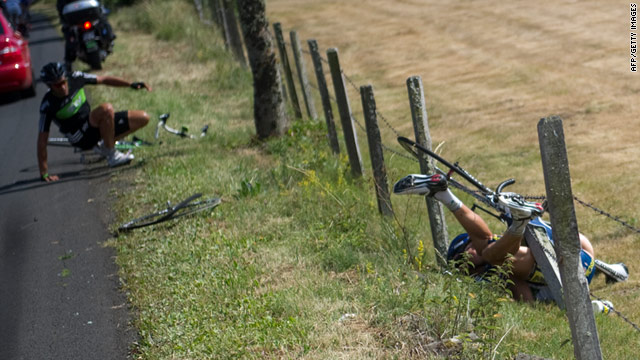 Juan Antonio Flecha (left) amd Johnny Hoogerland were the victims of a collision with a TV car during stage nine.
STORY HIGHLIGHTS

Spaniard Flecha was part of a five-man breakaway group when he was struck by a French TV vehicle overtaking them.

Flecha fell to the road while fellow-escapee Johnny Hoogerland of Vacansoleil was catapulted into a barbed wire fence on the side of the road.

Despite blood seeping through various cuts and abrasions both riders eventually got back on their bikes to finish the stage some way adrift of the leaders -- with Hoogerland in some distress as went onto the podium to collect the climber's polka-dot jersey.

Tour organizers immediatly excluded the vehicle for the remainder of the race and have opened an investigation, while police are also making enquiries and gathering statements.

Speaking to reporters on Monday's rest day, Team Sky chief Dave Brailsford said: "It was plain for everyone to see -- that crash shouldn't have happened.

It was plain for everyone to see -- that crash shouldn't have happened.
--Team Sky chief Dave Brailsford
RELATED TOPICS

"Everybody saw it, everyone saw the severity of it so I don't think we need to fan the flames of that anymore.

"Once you've got the facts then you can decide and evaluate whether there's an opportunity for the police to do something. There are different options available."

Asked specifically about the possibility of legal proceedings, Brailsford added: "All the options includes anything you can think of."

Despite fears he had fractured an elbow, scans have revealed no break, and Flecha told reporters he expects to start Tuesday's 158km 10th stage from Aurillac to Carmaux.

"Tomorrow I'll be able to ride, how well I don't know but I really don't care, said Flecha.

"At first I want to see how everything goes. I'm thinking more long term. I'm more concerned about the Pyrenees. I can't bypass the Pyrenees," he added.

Meanwhile, Russian Alexander Kolobnev has become the first rider to be kicked off the Tour de France after testing positive for a banned substance.

The 30-year-old Katusha rider, who was lying in 69th place in the overall standings, tested positive for hydrochlorothiazide on July 6.

Hydrochlorothiazide is listed as a banned substance as it can also be used to mask other drugs.

Kolobnev is better known as a one-day specialist, having twice won the Russian national championships, as well as taking the silver medal in the 2007 and 2009 world championships and bronze at the 2008 Beijing Olympics.