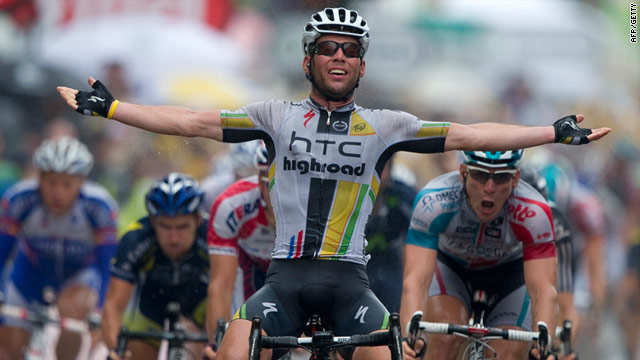 (CNN) -- Britain's Mark Cavendish put his previous day's disappointment behind him to win the 11th stage of the Tour de France in commanding fashion Wednesday.

It was the Manxman's third stage win of this year's race and his 18th overall in cycling's most prestigious race, moving him to seventh on the all-time list.

The HTC-Columbia star had lost out to former teammate Andre Greipel in the sprint finish to stage 10, but reversed the placings after the 167.5km from Blaye-les-Mines to Lavaur.

The finale came in torrential rain, but Cavendish braved the elements to launch his trademark burst for the line with perfect timing and this time Omega Pharma-Lotto's Greipel could not respond.

American Tyler Farrar, who won the third stage of this year's Tour, finished third for Garmin-Cervelo.

Victory came on the 44th anniversary of the death of the legendary British cyclist Tommy Simpson and it has taken Cavendish into a 16-point lead in the race for the green jersey.

"It's everything I wanted when I came here this year," a delighted Cavendish told Eurosport.

Frenchman Thomas Voeckler, of Europcar, retained the race leader's yellow jersey as he safely finished in the main bunch, as did the other major contenders for overall honors.

Spain's Contador (Saxo Bank) will be looking to retrieve the time he lost after being caught behind a crash on the first day.