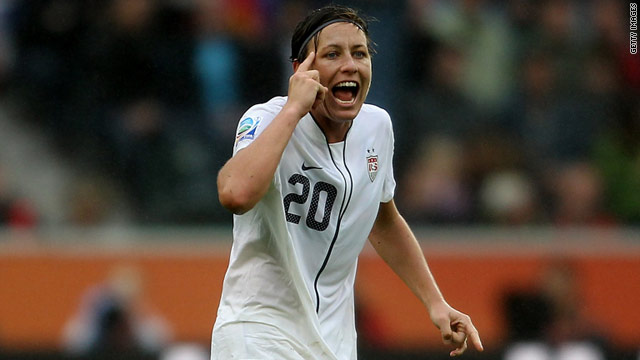 (CNN) -- Abby Wambach, the skillful forward for the U.S. women's soccer team, scored dramatic headers against Brazil and France to help the American team advance to the World Cup final.

Now she's heading off to the championship match against a tough Japan team, a much-awaited contest set for Sunday in Frankfurt, Germany -- where the U.S. can win the tournament for a record third time.

The 31-year-old Wambach, speaking to CNN in a phone interview on Thursday, bubbled with confidence, patriotism, and enthusiasm as the team bids to follow up its 1991 and 1999 successes.

She thinks the United States can beat Japan, a team emboldened to score a victory for a nation wracked with tragedy this year after an earthquake and tsunami devastated the country.

Who will star at the women's World Cup?

Japan, she said, is a "possession-oriented" squad that's "technical on the ball."

"We have to be patient. We're going to get chances and have moments where we can score goals, and I think physically we're going to be able to dominate them," she said.

"So, if we can take care of the chances that we get, put away goals early on."

Wambach, according to her bio on the U.S. team website, has "developed into one of the most dangerous goal scorers in the world" and is "one of the world's best players in the air" -- as proven by her heading skills.

The U.S. advanced to the final after defeating France 3-1 in the semifinals on Wednesday. Wambach scored the second in the 79th minute with a dramatic header, her third goal of the tournament so far.

And her last-gasp headed goal against Brazil on Sunday -- which got her an ESPN ESPY award for "best play" -- helped the U.S. level at 2-2 and take the quarterfinal to a penalty shootout, in which she also scored.

"Some say maybe it was perfect timing for us," she said, noting she was humbled and honored by the ESPY award. "We believe it's our destiny."

People are gathering in sports bars to cheer on the U.S. team, and the American support for the World Cup team has thrilled the players.

"We really want to make everybody back home proud. We're going to keep this thing going. We have this huge game on Sunday and if we can all play well and keep giving our most and leave everything on the field, hopefully we'll come home as World Cup champs."

Wambach was asked whether she will have another shot at a World Cup, which is played every four years.

"It's a good question but right now my focus is here (in Germany)," she said.

"This team is special. And this team, I can't put my finger on what makes this team so special, but the fact is we just don't give up. We're not quitters. We won't give up for the entire 90 minutes that we play on Sunday.

"I think we can do this. I know that the players on my team, the coaches, the staff, we've all put so much time and effort into training and preparing for this. We're not going to let it go lightly. It's going to be a great match. I can't wait to start it and hopefully to see that we're champs at the end."