Bolt battles to victory in Monaco 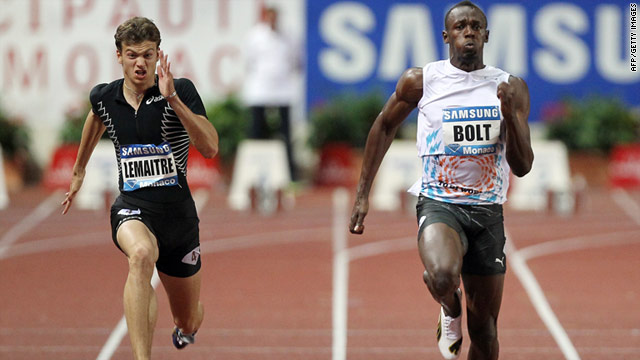 (CNN) -- World and Olympic champion sprinter Usain Bolt had to battle hard to win the 100 meters race at the Diamond League meeting in Monaco on Friday.

The Jamaican, who will defend three titles at the World Athletics Championships in South Korea starting at the end of next month, was far from top form as he edged out compatriot Nesta Carter.

However, the 24-year-old still set his season's best time of 9.88 seconds despite his poor start to the race, while Carter clocked 9.90.

It was 0.3s slower than his world record and 0.1s behind the 2011 leading time by fellow Jamaican Asafa Powell, who heads the series' point standings.

"I came into the race but didn't execute well. I had to work hard and concentrate," Bolt told reporters after his final 100m warm-up before the August 27-September 4 world event in Daegu.

"There are some little things to work on. I have time before the world championships and I will continue to do my best. I'm almost back to 100% on the final 60m and I've got to work on the first half. I'll take it one step at a time and hopefully the next race will be better."

American Michael Rodgers was third in 9.96 ahead of a third Jamaican, Michael Frater, who clocked 10.01.