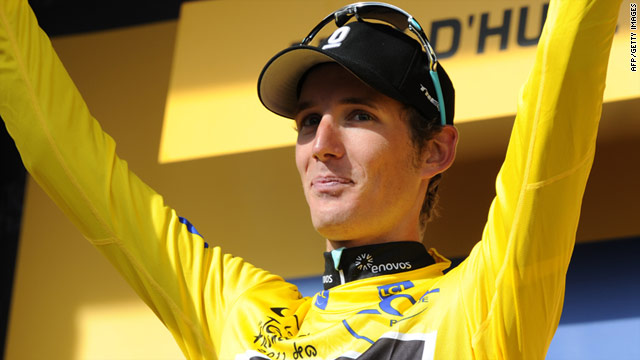 Leopard-Trek rider Andy Schleck has been runner-up at the Tour de France the past two years.
STORY HIGHLIGHTS

(CNN) -- Andy Schleck is confident he can hold on to the Tour de France's coveted yellow jersey after Saturday's decisive time trial and win cycling's biggest race for the first time.

The 26-year-old from Luxembourg will have a 53-second lead from his older brother Frank after overhauling previous leader Thomas Voeckler in Friday's 19th stage from Modane Valfrejus to Alpe-d'Huez.

Another four seconds back lurks Australia's Cadel Evans, like the younger Schleck a two-time runner-up but rated as stronger in time trials.

"Many riders say that the yellow jersey gives you wings, and I hope that will be the case tomorrow," stage 18 winner Schleck told the race website.

I haven't been so close to winning the Tour ever before, and this is a realization of everything that I had in mind
--Andy Schleck
RELATED TOPICS

"I couldn't have told a writer to create a better Tour de France. It's all there -- the suspense is perfect. You could say 'It's only a minute' or you can say 'It's a minute!' I count on myself for the time trial. I'll do a good ride. I think I can hold on to the yellow jersey. I've been chasing it for a while.

"I haven't been so close to winning the Tour ever before, and this is a realization of everything that I had in mind -- to take yellow in the Alps. Of course tomorrow is going to be a lot of hard work but I'm confident. I showed great form until now and I'll do the same again tomorrow."

Voeckler had surprisingly held the maillot jaune since the ninth stage, but he finally gave way as three-time champion Alberto Contador attacked in a desperate attempt to keep his title hopes alive.

The Spaniard sparked a breakaway that left Evans trailing due to mechanical problems, while Voeckler -- whose lead was trimmed to 15 seconds by Schleck on Thursday -- ended up losing significant time.

Evans bravely battled back into a good position, but Contador could not keep up the pace and was overtaken by Voeckler's Europcar teammate Pierre Rolland -- who gave France a famous stage win.

Samuel Sanchez finished second ahead of his compatriot Contador to clinch the King of the Mountains polka-dot jersey, while Evans and the Schlecks were in a group of six riders credited with the same time -- 57 seconds behind Rolland.

Voeckler dropped to fourth overall, two minutes and 10 seconds behind the leader, while Contador was sixth behind Italy's Damiano Cunego with a deficit of 3:55.

The 24-year-old Rolland praised Voeckler after becoming the first Frenchman to win on Alpe d'Huez since Bernard Hinault in 1986.

"I said I wanted to do everything possible to defend the yellow jersey of Thomas, but on the climb of the Galibier he told me, 'Seize your chance, don't worry about me.' This is also where I see that he is a great champion, one who was able to tell me to go at the right time," Rolland said.

"I immediately wanted to prepare myself for something by attacking in the valley. Still, this is a climb that I know very well, one that I've reconnoitered more than a dozen times last year.

"When I found myself with two Spaniards, I knew they knew each other very well. So I told myself that I would not finish second, it was win or nothing.

"This is a stage that I've watched dozens of times on video, with Armstrong, Pantani ... I studied their cadence. And now it's me who has won! It will take me a little time before I realize what I've done."

The penultimate of the race's 21 stages -- which is the only individual time trail in this year's route -- is traditionally where the title is decided.

Sunday's finale is a procession into Paris for the yellow jersey wearer before the sprinters take center stage up the Champs Elysees.

British sprinter Mark Cavendish has a 15-point lead as he seeks to win the green jersey for the first time, while in the teams category Garmin-Cervelo hold a near 12-second advantage from Agr2 La Mondiale, with the Schlecks' Leopard-Trek another second back in third.