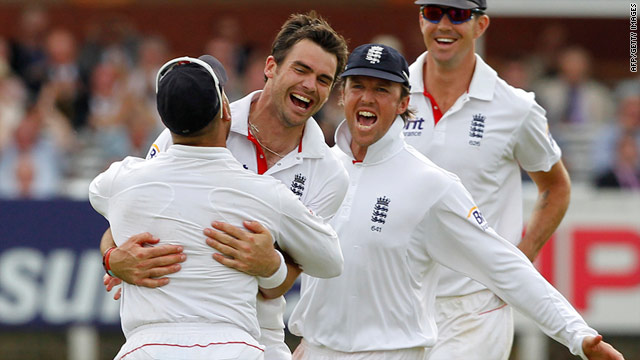 (CNN) -- England took nine second-innings wickets on the final day's play against India at Lord's Monday to take a 1-0 lead in the four-Test series.

Stuart Broad took the final wicket of tailender Ishant Sharma to end a remarkable match that saw the fortunes of both teams veer dramatically over the course of 2,000th Test in cricket history.

The fifth day started in brilliant sunshine in north-west London as India -- ranked number one in the world in the five-day game, with England following closely behind -- attempted to save the match.

England had set India a tough target of 458 to win, and the tourists reached 80-1 at stumps on the fourth day, giving them hope of at least a draw.

But wickets soon fell in the morning session with seam bowler James Anderson removing Rahul Dravid -- who scored an unbeaten century in the first innings but managed just 36 in the second -- before accounting for the key wicket of Sachin Tendulkar.

India's greatest player was looking to secure a historic 100th hundred in international cricket, but fell for 12 to Anderson who finished with figures of 5-65.

VVS Laxman (56) and Suresh Raina both offered resistance with battling half-centuries but when the latter finally succumbed for 78, also to Anderson, the match was all but over. Up stepped Broad to remove Sharma, trapped leg before wicket, and spark wild celebrations in the crowd.

"The way the bowlers stuck at their task today was great."

The players won't have long to recover. The second Test starts Friday in Nottingham, with England needing to win by two clear matches to replace India at the top of the rankings.