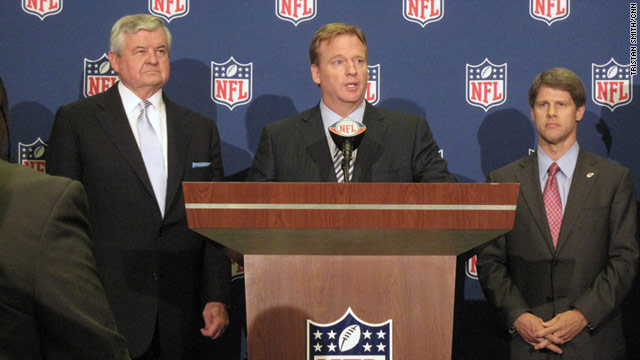 (CNN) -- NFL player representatives and the league's owners on Monday signed a collective-bargaining agreement to end a lockout that threatened to derail the 2011 season.

"Football's back!" NFL Roger Goodell exclaimed at a news conference in Washington after the agreement was signed, ending the four-month lockout. He said the 10-year agreement "is extraordinarily great for our game."

The agreement was signed after members of the NFL Players Association unanimously approved the deal offered by the league's 32 owners early Monday. Chief among the issues embraced in the deal was the main issue of the lockout -- how to divide the $9 billion the NFL takes in each year.

The owners said the old labor deal didn't take into account the rising costs related to building stadiums and promoting the game. The players argued that the league had not sufficiently opened up its books to prove this.

"We managed to talk about things that make football better and safer," NFLPA Executive Director DeMaurice Smith told reporters on Monday. "There are a number of issues that (needed) to be considered. ... The good thing is, the only way to talk about these things is if you're a union."

The compensation issue was resolved when both side embraced an "all revenue system" as the basis for player compensation, according to an NFLPA news release. Under the system, the floor for the players' share of the revenue is set at 47%.

The deal sets the salary cap at about $120.4 million per club -- plus $22 million in benefits for performance-based pay in 2011. This includes a guarantee for the league as a whole to spend no less than 99% of the cap in 2011 and 2012, and no less than 95% in consecutive four-year periods thereafter.

Both sides over the weekend discussed details that players wanted resolved, including the contractual handling of player injury, an opt-out clause in the 10-year deal and, "most pointedly, the potential timeline for the recertification of the NFLPA (NFL Players' Association) as a union," the NFL said.

In a bid to reduce injuries, the pact eliminated "two-a-day" practices, set a maximum of 4.5 hours on-field per day during training camp, and limited full-contact practices to an average of one per week not exceeding three hours. It also allows for unannounced inspections by NFLPA staff to ensure compliance. It also limits off-season workout requirements.

Player representative Jeff Saturday acknowledged that the lockout "has been (a) roller coaster for the fans," but he echoed the cheerfulness from both sides: "With dialogue, things began to happen," said Saturday, a center for the Indianapolis Colts, "and ...now instead of these meeting rooms, I get to be in football meeting rooms (at training camp)."

With the signing of the deal, the clock begins to roll on the 2011 season, beginning with the league's publication of its free agency list. The rest of the week will be dominated by the deferred business of expanding rosters, signing drafted rookies, reopening facilities and starting camps in preparation for preseason games, the first of which are on August 11, according to an updated league schedule released Monday.

The only confirmed casualty of the lockout is the annual Pro Football Hall of Fame Game, which was canceled because of the delay in opening camps, Goodell said. The game, which this year was to be between the St. Louis Rams and Chicago Bears, had been scheduled for August 7.

The league's owners imposed the lockout on March 11, suspending the labor deal in place at the time in hopes of creating a new financial structure. Ten players, including marquee quarterbacks Drew Brees, Tom Brady and Peyton Manning, subsequently filed an antitrust lawsuit against the league on behalf of other current and eligible NFL athletes.

After the lockout, the two sides faced off in courts and around conference tables. The issues revolved around how to divide the billions of dollars of revenue reaped via the league each year, rules of free agency, the rookie wage scale, retirement benefits and a host of other matters.

According to the NFLPA, the deal, among other things:

-- Sets the overall limit on rookie compensation at $874 million in 2011 (increasing with salary cap);

-- Sets minimum pay for high draft picks at a graduated scale based on average pay of the highest-paid players at those positions;

-- Guarantees contracts against injury for up to three years;

-- Creates a $610 million Legacy Fund for players who played before the 1993 season;

-- Allows the NFLPA discretionary use of $20 million per year for health, safety and "former player issues;"

-- Calls for a three-member appeals panel, including at least one former judge, to resolve disputes.