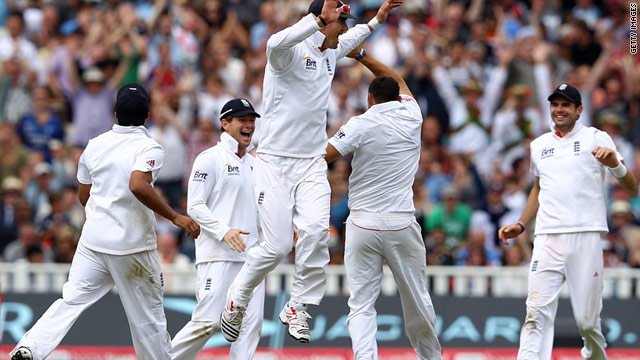 England's players celebrate at Edgbaston as India are bowled out for 244 in their second innnings.
STORY HIGHLIGHTS

(CNN) -- England have become the top-ranked nation in Test cricket after crushing India by an innings and 242 runs in the third Test match at Edgbaston on Saturday.

Needing to win the Test series by two clear matches to supplant India at the top of the ICC's Test Championship table, England have now secured a 3-0 lead with only one match remaining.

It is the first time England have occupied top spot since the creation of the table back in 2003.

"(Getting to number one) has been a goal of ours for some time and it's a great testament to everyone involved," England's captain, Andrew Strauss said afterwards, AFP reported.

"It fills me with a lot of pride to be able to stand up here and know that we have achieved something very special as a group. The guys have put in a lot of hard graft over the two years and they have got what they deserved," Strauss added, AFP reported.

England's ascent to the summit of Test cricket never looked in doubt as India's batsmen once again crumbled in the face of some disciplined and aggressive English bowling, with wickets tumbling from the off.

Jimmy Anderson struck with his first ball of the morning as Gautam Gambhir edged to Swann at second slip, and Rahul Dravid was given out caught behind in Anderson's second over, leaving India 40 for three.

VVS Laxman fell in similar fashion a short time after, as a rampant Anderson bagged his and England's fourth wicket of the innings.

Swann then trapped Raina lbw for 10, before running out an unlucky Tendulkar, who had compiled a stylish 40.

A straight drive from Indian captain MS Dhoni brushed the fingertips of the England off-spinner before cannoning onto the stumps at the non-striker's end with Tendulkar out of his ground.

Some lusty hitting from Praveen Kumar (40 from 18 balls) and a typically combative innings from Dhoni (74 not out) took India past 200 but it wasn't long before England wrapped up the match as Sreesanth guided a catch to Kevin Pietersen at gully off the bowling of Tim Bresnan.

"We were not really up to the mark in this series and the margin of defeat is only getting bigger and bigger," India's captain, MS Dhoni said after the match, AFP reported.

"There are areas where we need to improve as a side, our bowling and batting department has not really clicked in this series," he added, AFP reported.

The final Test match of the series gets underway at the The Oval in south London on Thursday 18 August.