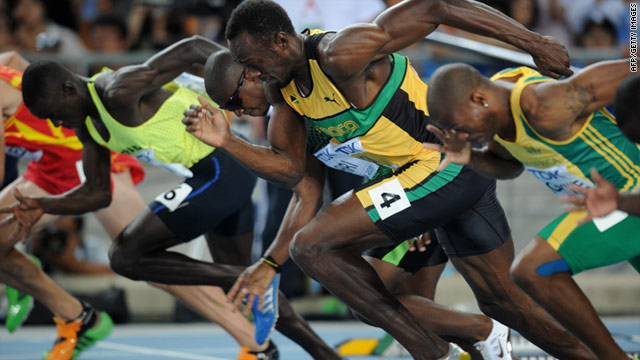 Usain Bolt (center) is out of the blocks first in his 100m heat at the World Athletics Championships in Daegu, South Korea.
STORY HIGHLIGHTS

(CNN) -- Reigning world and Olympic champion Usain Bolt has eased his way through the 100m heats on the first day of the IAAF World Championships in Daegu, South Korea.

The Jamaican sprinter, who broke his own 100m world record at the 2009 World Championships in Berlin with a time of 9.58 seconds, won his heat in 10.10 seconds to advance to Sunday's semifinals.

"I feel great. I did well. People are going to say what they want but I'll focus on what I want. Nobody has broken my world record," Bolt said, AFP reported.

"I've worked during the season. I've worked it out so that's why it looked so easy -- focus and exercise. I was really happy because I worked hard all season. I finally got it right," Bolt added, AFP reported.

I feel great. I did well. People are going to say what they want but I'll focus on what I want.
--Usain Bolt
RELATED TOPICS

Bolt's compatriots Nesta Carter, Michael Frater and Yohan Blake are also safely through to the semifinals as are the United States trio of Justin Gatlin, Trell Kimmons and Walter Dix.

Meanwhile, Kenya's female distance runners had a day to savour as they scooped all six medals on offer on the opening day of the championships.

Vivian Cheruiyot claimed Kenya's second gold of the day in the 10,000m winning in a time of 30 minutes 48.98 seconds. Fellow countrywoman Sally Kipyego crossed the line in second, while 2009 champion Linet Masai came in third to cap a memorable day.

"It's absolutely fantastic. It's a wonderful day for Kenyans and for the entire country. Cheruiyot said, AFP reported.

But it was a day of despair for reigning Olympic champions Australia's Steve Hooker and Britain's Christine Ohuruogu.

Defending pole vault champion, Hooker failed to register a single vault in three attempts at the modest height of 5.50 meters, while Ohuruogu was disqualified during the heats for the 400m after making a false start.

Saturday also saw the start of the decathlon with America's Ashton Eaton and Trey Hardee leading the way.