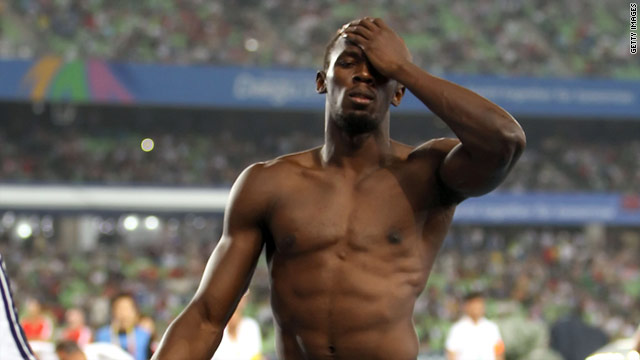 A disconsolate Usain Bolt walks away after his shock disqualification in the world 100m final.
STORY HIGHLIGHTS

Bolt has dominated men's sprinting since winning 100-meter and 200-meter gold at the Beijing Olympics in 2008, achieving the same feat at the world championships in Berlin the following year -- smashing the world record in the process.

And although he had not entered this year's worlds in top form, the absence through injury of rivals Asafa Powell and Tyson Gay meant he was the hot favorite to retain the first part of the sprint double.

However, the 25-year-old fell foul of the current false start rules, which state that any athlete who jumps the gun is immediately disqualified.

I can't find words to explain it. Usain Bolt has been there for me. I feel like I want to cry
--Yohan Blake
RELATED TOPICS

Bolt knew immediately he had started too early and was helped off the track, head in hands, with a packed stadium watching on in disbelief.

Once the race did eventually get under way, a muted atmosphere ensued as Blake -- a training partner of Bolt -- powered home to win in 9.92 seconds.

"I can't find words to explain it. Usain Bolt has been there for me. I feel like I want to cry," Blake told reporters. "I felt I would win the race for Bolt."

Despite Bolt's shock exit, it proved a good day for defending world champions, with three athletes retaining the titles they won two years ago in Berlin.

Meanwhile, Russian Valeriy Borchin was another to retain his title, coming home first in the men's 20-kilometer walk.

Li Yanfeng of China secured gold in the women's discus, but there was heartache for Ethiopian distance legend Kenenisa Bekele, whose attempts at a fifth consecutive men's 10,000-meter world title came to an end after he was forced to pull out of the final with groin and hip injuries.

However, the gold medal still went to Ethiopia with Ibrahim Jeilan outsprinting Briton Mo Farah in a devastating burst to the line.

The South African, who runs with carbon fiber prosthetic running blades, came third in his men's 400-meter heat to qualify for Monday's semifinal, with the final on Tuesday.