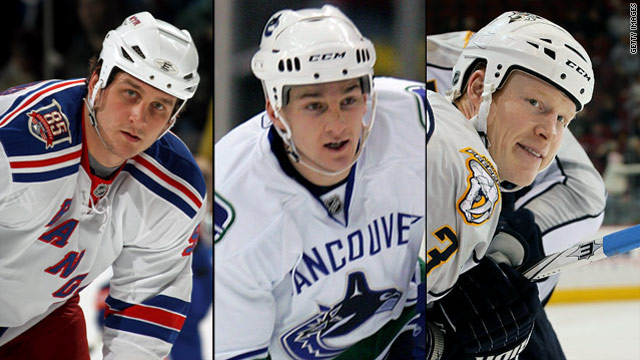 (CNN) -- It's arguably the toughest job in sports.

Hockey enforcers earn the undying devotion of fans -- but not much else -- for their ability to punch and get punched on skates. They usually bounce from team to team, barely managing to get a contract for a role few can perform well and no one else wants.

"I did it because it was my job but I hated it," said Georges Laraque, one of the most successful hockey heavyweights in his 12-year NHL career. "I hated to fight. I hated the pressure. I hated to be called a goon, and an animal. I hated promoting violence."

Laraque spoke to the Cybulski & Company radio program in Canada after the news Wednesday that another former enforcer, Wade Belak, was found dead in his Toronto apartment at age 35. Authorities described the death as nonsuspicious.

It was the third death of a current or former National Hockey League enforcer this summer, an almost unfathomable statistical anomaly. There are 30 NHL teams, and not all of them employ a so-called "hired gun" these days, both to intimidate opposing players and keep them honest.

Derek Boogaard was found dead at age 28 in his Minneapolis home in May, the result of a toxic combination of painkillers and alcohol ruled an accident. Boogaard, one of the most feared NHL fighters at 6-foot-7 and 265 pounds -- he was known as the Boogeyman, hadn't played in months while trying to recover from concussions sustained in on-ice bouts.

In August, 27-year-old Rick Rypien was found dead in his home in Crowsnest Pass, Alberta, Canada. No official cause has been announced, but Rypien had a history of depression and was on personal leave from the Vancouver Canucks for much of last season. He signed a contract with the Winnipeg Jets for the coming season.

SI.com: Full coverage of the NHL

Belak's death this week stunned former teammates, who described him as a happy-go-lucky man always cracking jokes, even at his own expense. At 6-foot-5 and well over 200 pounds, Belak developed into a feared heavyweight over a 14-year career with five teams.

He retired from the league last season and was trying to start a broadcasting career. He was chosen to participate in the coming season of "Battle of the Blades," a Canadian version of "Dancing With the Stars" on skates.

While few answers regarding Belak's death have emerged so far, Laraque provided some insight in describing the life of the hockey enforcer.

The worst part is not the fighting itself, he said, because the adrenaline kicks in and you don't feel the blows. Instead, what weighs heaviest is the constant pressure of knowing you will have to fight another enforcer such as Boogaard or Belak, game after game, according to Laraque.

"It's the night before, the day of the game, before it starts," he said. "It's the shivers that it gives you, the worry in the head and the brain. It's when you go to a movie and you can't watch it because you're thinking the next game about having to fight Derek Boogaard or someone like that. Or you don't feel well, but something happens and you have to go out there. ... It's that pressure that's nonstop that you live with."

For that reason, he said, enforcers past and present have "demons" they live with, and often turn to alcohol to deal with them.

"For as many years that they played, many of those guys didn't make much money, so there are not options for them afterwards," Laraque said. "You have to fight to live when life after hockey is over, and there's nothing for you."

To Daniel Alfredsson, the longtime captain of the Ottawa Senators, "it's an adjustment from the high-profile life you live to go back to everyday (life), I guess."

Such a spate of deaths among former enforcers, however, raises questions about whether such players are particularly vulnerable to the pressures of life -- either the physical grind of concussions and punches to the head, or the mental strain described by Laraque.

When former NHL enforcer Bob Probert died suddenly last year at age 45, researchers discovered he had Chronic Traumatic Encephalopathy, a degenerative brain disease. Probert, a legendary tough guy who had a history of alcohol and drug abuse, died of heart failure while on a family boat outing.

After Rypien's death last month, described by Canadian police as a "nonsuspicious sudden death," NHL Commissioner Gary Bettman said he expected the program to be reviewed.

"My guess is we'll talk at the appropriate time with the players' association, making sure that we're comfortable with all of the mechanisms and programs we have in place, which are extensive," Bettman told The Canadian Press then. "I don't think any sports league does more than we do, but maybe there's more, as we focus on it, that we need to focus on. I know it's always hard for people to accept, but sports is a microcosm of society in general. And life isn't always easy."

Especially for hockey enforcers. Despite his hatred for the brawling in his career, Laraque said he would always support allowing fighting in hockey.

Hockey is the only team sport that allows two players to fight without getting ejected for the rest of the game, and Laraque said that element allows players to police themselves and prevent more violent stick fouls and other mayhem.

"Guys like me, if there's no fighting, we won't be making a living," he said. "As tough and as hard as it is, I'll always be defending that job."

Removing fighting from the game means denying opportunity for kids who dream of an NHL career, just as he did.

To realize his dream, he became an enforcer, explaining: "I did that because I knew that's what I had to do."