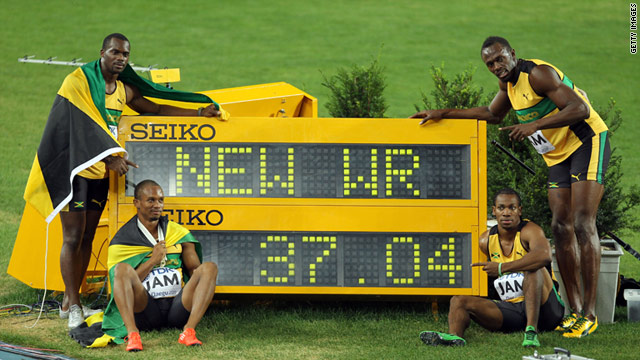 Usain Bolt (top right) celebrates with his Jamaican teammates after the quartet set a new world record in the 4x100m relay.
STORY HIGHLIGHTS

(CNN) -- Usain Bolt ensured the world athletics championships in Daegu ended on a high by leading Jamaica to a stunning world record in the final of the men's 4x100m relay on Sunday.

Exactly a week after Bolt's shock disqualification from the final of the 100 meters, the sprint superstar once again underlined his superiority as he carried the baton home in a time of 37.04 seconds, bettering the Jamaican squad's previous world record set in the final of the 2008 Beijing Olympics.

The quartet of Nesta Carter, Michael Frater, new 100m champion Yohan Blake and Bolt were pressed three-quarters of the way by a strong United States team.

However, a bizarre incident on the final changeover saw American third leg runner Darvis Patton crash to the ground after colliding with Harry Aikines-Aryeetey -- who was running the Great Britain anchor leg -- ruling out both teams.

This meant Bolt was out on his own as powered down the finishing straight, with France claiming a distant silver medal and the tiny Caribbean nation of St Kitts and Nevis winning an unexpected bronze medal.

Bolt, who was celebrating his second gold in 24 hours after retaining his world 200m title, normally runs the third leg for the Jamaican team, but Asafa Powell's injury forced him to miss the championships, meaning he was switched to the anchor leg.

"I enjoyed being the anchor but for me it was just to go out there and be fast," Bolt told reporters.

"We did just that. I am proud of my team and I'm very happy with myself," added the 25-year-old, who celebrated in his own unique style by leading his teammates through a series of dance moves in front of a delighted crowd.

But there was some consolation for the United States sprinters as the women's squad took gold ahead of Jamaica in the women's 4x100m relay, with Ukraine taking the bronze medal.

There was a surprise result in the men's triple jump where American Christian Taylor recorded the fourth largest jump of all time to pip Britain's defending champion Phillips Idowu.

The 21-year-old recorded 17.96 meters with his fourth attempt to leave Idowu in second place on 17.77m. Another American, Will Claye, claimed bronze.

There was a thrilling finish in the final of the men's 5,000m where Britain's Mo Farah made up for the disappointment of being caught on the line in the 10,000m by securing his first-ever gold medal in a major championships.

Farah was pushed hard by 2007 champion Bernard Lagat, but he held on to finish 0.28 seconds ahead of the American.

Ethiopia's Dejen Gebremeskel took bronze after his compatriot Imane Merga was disqualified for stepping inside the curb.

Savinova, the reigning world indoor and European champion, was the favorite coming into the event, and she justified that tag by coming from near the back of the pack at the 600m mark to clinch the gold medal in a time of one minute 55.87 seconds.

The final day of competition confirmed the United States at the top of the medal table with 12 golds, ahead of Russia with nine and Kenya on seven.