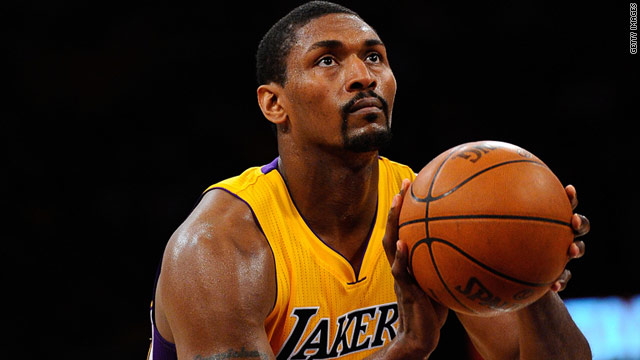 (CNN) -- This may be the last time Los Angeles Lakers forward Ron Artest will answer to that name.

The NBA star, who is known for his defense and unpredictable behavior, will now be known by a different name.

"Metta is his official first name; which in the Buddhist tradition means loving-kindness and friendliness toward others and his last name is World Peace," his publicist said.

The basketball star is scheduled to be at the Los Angeles County Superior Court at 8:30 a.m. (11:30 a.m. ET) where he will officially become Mr. World Peace.

Artest (World Peace) joins a fraternity of sports stars who have changed their names.

Artest's (World Peace's) reason for changing his name seems similar to the reason that former NBA player Lloyd Bernard Free changed his name to World B. Free in the 80s.

"Ron Artest, (World Peace) has contemplated the name change for years and always knew that he wanted his last name to be World Peace but it took many years of research and soul searching to find a first name that was both personally meaningful and inspirational," his publicist said.

Artest (World Peace) first announced that he was seeking the name change in the summer. At that time, some said seeing the name World Peace on the back of his jersey would be ironic given that he is known for thrashing fans in an infamous 2004 brawl during a game against the Detroit Pistons at The Palace of Auburn Hills.

Artest (World Peace) was suspended a record-setting 86 games for jumping into stands and punching fans during that incident when he played for the Indiana Pacers.

But the new name may speak to his new reformed image. In recent years, Artest (World Peace) has shed his bad boy image and is more known for his basketball skills and his random acts of kindness.

Recently, he raffled off his 2010 NBA Championship ring to help youngsters with mental illnesses and he won the NBA's citizenship award for his philanthropy in that field.

He will also be in the upcoming season of "Dancing With the Stars."