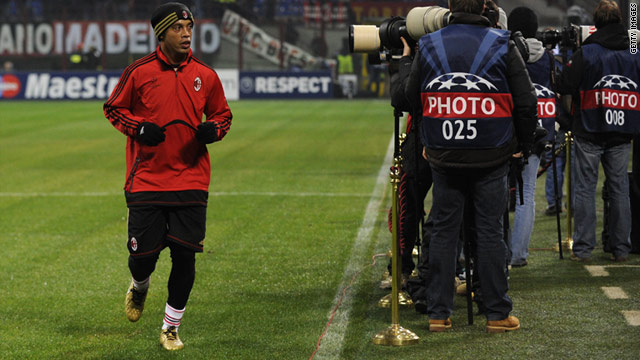 Ronaldinho has only found the net once for AC Milan this season.
STORY HIGHLIGHTS

Rovers' manager Steve Kean said the prospect of AC Milan star Ronaldinho and Beckham coming to Ewood Park during the January transfer window was a sign of the ambition shown by the club's new Indian owners.

"If you asked any Premier League manager if they wanted somebody who had been the world player of the year twice, then I reckon they would say 'yes I'm interested," he told the club's website on Tuesday.

"It is something that puts us on the map as far as trying to bring players of great stature to the club."

Who will be the bargain signings of the January sales?

Poultry giants Venky's took control of the Blackburn in November and sacked former boss Sam Allardyce the following month when they handed the role to Kean.

Ronaldinho, who was named FIFA World Player of the Year in 2004 and 2005, has struggled to recapture his best form at the San Siro and has also been linked with a likely return to former club Gremio in Brazil.

"It shows our intent," said Kean on Blackburn's bid for the former Barcelona playmaker. "It shows we are trying to go to a different level and I think that can only be positive.

"In some areas it has been perceived and written about as if it is something of a negative, but I just can't see that."

Former Real Madrid and Manchester United midfielder Beckham, who has been linked with a return to England during the Major League Soccer close season, has emerged as another target for Rovers.

The British media reported Tottenham Hotspur and Newcastle United are also chasing the 35-year-old, but Venky's chair Anuradha Desai told the BBC that Blackburn were "open whenever he is ready to come."

Desai also confirmed the club's interest in Ronaldinho and outlined the financial package on offer to the 2002 World Cup winner.

"He (Ronaldinho) is keen to play in the English Premier League and I think that goes in our favor.