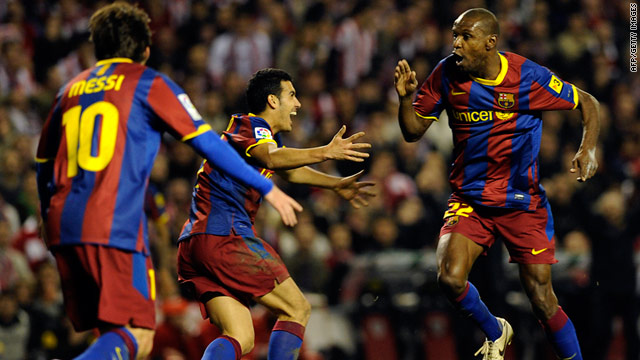 (CNN) -- Barcelona battled into the quarterfinals of the Copa Del Rey on Wednesday night as veteran French defender Eric Abidal scored his first goal for the Spanish champions in a 1-1 draw at Athletic Bilbao.

Pep Guardiola's team set up a clash with either La Liga rivals Getafe or second division Real Betis after winning on away goals following the 0-0 draw at the Camp Nou last month.

The 31-year-old Abidal, who was brought on as a second-half substitute, netted only the second goal of his career in the 75th minute to leave Bilbao needing two goals to go through.

The left-back sidefooted home after Xavi marked his record-breaking 550th appearance for Barcelona with a trademark pass to the feet of the recalled Lionel Messi, who guided the ball into Abidal's path.

The Basques threatened to take the match into extra-time when Spain striker Fernando Llorente continued his fine scoring run with an 85th-minute equalizer, but Barcelona held on.

"When I get a chance like that, I shoot. Now I hope to score more this season," Abidal told AFP.

Defending champions Sevilla cruised into the last eight with an 8-3 aggregate victory over La Liga rivals Malaga, winning 3-0 in the away leg.

Ivory Coast midfielder Ndri Romaric scored the opener with a deflected freekick six minutes after halftime, then substitute Diego Perotti made it 2-0 before Malaga defender Weligton was sent off for a second booking and Brazil striker Luis Fabiano netted late with another setpiece.

What were the top sporting moments of 2010?

Sevilla will next play either Villarreal or Valencia, who meet on Thursday following a 0-0 first-leg draw.

Top-flight team Deportivo La Coruna needed extra-time before ending the hopes of second division Cordoba as Adrian scored a hat-trick in a 3-1 win.

The Spain under-21 international's treble ultimately gave the Galicians a 4-2 aggregate victory, but he needed to convert a penalty late in regulation time to stop his side crashing out after David Arteaga struck in the 86th minute.

Cordoba collapsed after Miguel Angel Tena was sent off in extra-time as Deportivo set up a clash with either Mallorca or Almeria, who lead 4-3.