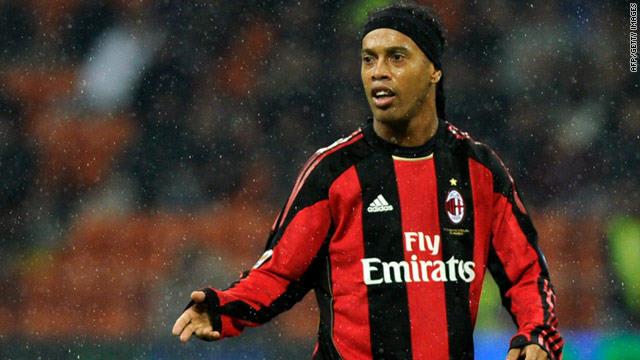 Ronaldinho has struggled to make an impact at AC Milan this season following the arrival of Robinho and Zlatan Ibrahimovic.
STORY HIGHLIGHTS
RELATED TOPICS

(CNN) -- Former world player of the year Ronaldinho will return home to Brazil, according to his Italian club AC Milan.

The 30-year-old has been targeted by the new owners of English Premier League club Blackburn Rovers, but he is now expected to rejoin his hometown club Gremio of Porto Alegre.

"We are all sorry to lose a player of the quality of Ronaldinho. But he has made a life choice by going to Brazil," AC Milan coach Massimiliano Allegri told reporters ahead of the resumption of the Serie A program on Thursday.

Ronaldinho is contracted to Milan until June, but is heading back to Rio de Janeiro as the two clubs seek to make a deal, according to Italian media.

Who will be the best deals of the January sales?

"If it were up to me, I would already be wearing the shirt of Gremio, even if at the cost of earning less. The problem is not what they offered me, but what Milan are asking for," he said in quotes reported by La Gazetta Della Sport.

If Gremio cannot agree a fee, then Brazilian rivals Flamengo will step in to sign Ronaldinho, according to Radio Globo.

He has been unable to resurrect his career since leaving Barcelona in 2008, losing his regular place this season following the arrival of compatriot Robinho and Sweden striker Zlatan Ibrahimovic.

Ronaldinho's place in the Milan squad has gone to Italy international Antonio Cassano, but Allegri said the former Sampdoria player was not certain to feature even as a substitute in the league leaders' trip to Cagliari.

However, British media widely reported on Wednesday that his American owners the LA Galaxy will sanction an off-season switch.

Tottenham's Premier League rivals Newcastle, who have also been linked with the 35-year-old former England captain along with Blackburn, tied up a permanent deal for France international Hatem Ben Arfa.

The 23-year-old winger had been on loan from Marseille, but is now contracted until mid-2015 after impressing before the double leg break he suffered in October.

"During my time out, I have been inundated with messages of support from fans and I want to repay them all with good performances on the pitch later this season," he told the club's website.

Manchester City's long-rumored signing of Bosnia striker Edin Dzeko took another step forward as the Wolfsburg player arrived in England for a medical.

City boss Roberto Mancini revealed on Tuesday that the German club had agreed to sell the 24-year-old, for a reported fee of around $40 million.

Romania striker Adrian Mutu may be seeking a new club after his Italian side Fiorentina threatened to take action following his training-ground walkout on Wednesday.

The club released a statement saying the 31-year-old would not play in Thursday's match against Bologna, and that he had left himself liable for possible legal action.

Mutu has twice been banned for drug use, while with English club Chelsea in 2004 and last year at Fiorentina.