Real go through despite defeat at Levante 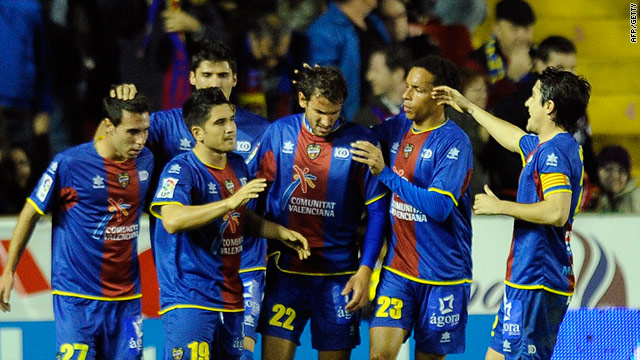 (CNN) -- Real Madrid went down to a 2-0 second leg defeat to Levante, but still eased into the quarterfinals of the Spanish Cup, 8-2 on aggregate.

Levante's two second-half goals by Xisco Nadal and Sergio Gonzalez were not enough to overturn Real's massive first leg advantage, but it was a boost for the Valencia-based side after an 8-0 first leg rout in the Bernabeu.

Last season's runners-up Atletico Madrid, who took a 1-0 lead to Espanyol, are also through after a 1-1 away draw.

But Real Betis put out top-flight Getafe with a 3-1 win that wiped the Madrid's club's 2-1 advantage from last month's first leg. The Seville-based side are now the only lower-tier club left in the competition.

Jorge Molina and a double from Ruben Castrol were enough for Betis with Getafe substitute Francisco Casquero scoring his side's only goal as they lost 4-3 on aggregate.

"They were much better than us. We have been humbled," Getafe coach Michel Gonzalez told AFP.

Almeria scored four first-half goals in a 4-3 win at Mallorca to advance win 8-6 on aggregate while Villarreal made it to the last eight after after beating Valencia 4-2 following their goalless draw in the first leg.

League leaders Barcelona secured their place in the quarterfinals on Wednesday with French international defender Eric Abidal scoring in the 1-1 second leg draw at Athletic Bilboa.

Barcelona, held 0-0 at home in the first leg, went through on away goals.