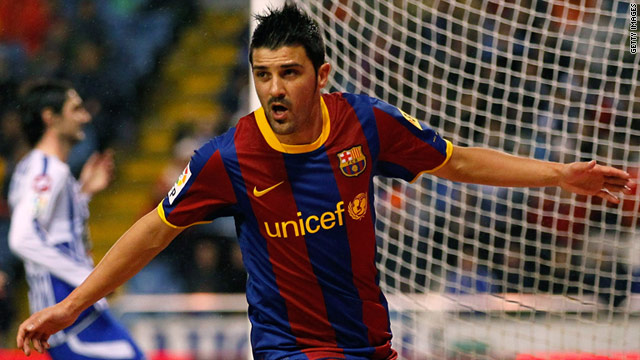 The Spain striker reached the milestone of 150 career league goals as he notched his 11th in 14 encounters with the Galicians.

Lionel Messi made it 2-0 in the second half with a superb free-kick before late strikes from Andres Iniesta and Pedro put more pressure on Real Madrid, who host third-placed Villarreal on Sunday night.

Xavi is one of three players on an all-Barcelona shortlist vying to win the inaugural FIFA Ballon d'Or award for the world's best player on Monday along with Messi and World Cup hero Iniesta.

Mascherano was involved in the opening goal in the 26th minute as he threaded a pass to Messi, who found Villa in space in the penalty area and the former Valencia star fired a shot under the body of goalkeeper Daniel Aranzubia.

It was Villa's 12th goal in the league this season and his 14th overall.

He has some way to go to match Messi, who curled his 18th of the La Liga campaign past a bemused Aranzubia in the 51st minute.

Iniesta cut in from the right to lash in a fierce left-foot shot with 10 minutes to go for his fifth league goal this season, and barely 60 seconds later winger Pedro pounced for his ninth and 14th overall.

In the first half, French fullback Eric Abidal thought he had followed up his first goal for Barca in the midweek cup draw at Athletic Bilbao but was flagged for offside to deny him just a third career strike.

The result left Deportivo, who had conceded only five goals in eight previous home games this season, in 12th place on 21 points after 18 rounds.

Sevilla moved up to ninth place with a 3-2 win at Real Sociedad, who suffered a fourth successive defeat.

Two goals in three second-half minutes turned the match as the visitors came from 1-0 and 2-1 down, with Fredi Kanoute netting twice and strike partner Luis Fabiano scoring the other.

Diego Rivas gave Sociedad the lead in the 23rd minute with a right-foot shot from the edge of the penalty area, but Kanoute leveled two minutes later with a volley from Fabiano's header down following a lofted corner.

Joseba Llorente caught out the Sevilla defense just before halftime as he won the race to a speculative long clearance and poked in a volley, but Fabiano stabbed home from close range on 63 for his fifth league goal of the season.

He had been set up by Alvaro Negredo, brought on as a third forward, and the former Real Madrid player was also a provider for Kanoute's winner as the Malian calmly slotted in the winner off the near post.

Athletic Bilbao snatched a last-gasp equalizer to earn a 1-1 draw at Malaga which left the Basque club on 26 points with Sevilla and Getafe -- only five points off the top four.

Malaga's Argentine defender Martin Demichelis headed an 80th-minute opener on his first appearance since signing from Bayern Munich, but Spain midfielder Javi Martinez struck at the end to leave the hosts just four points above the bottom three.