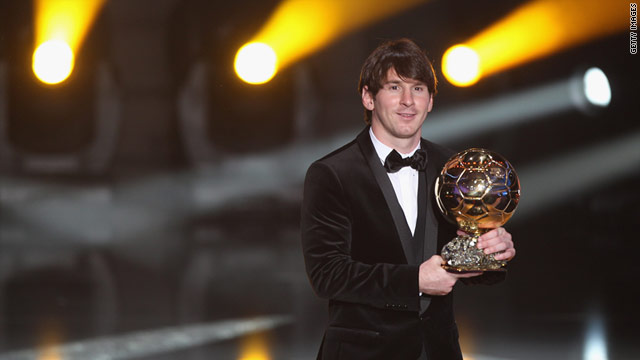 Lionel Messi with the FIFA Ballon d'Or award at the ceremony in Zurich.
STORY HIGHLIGHTS

Argentina star Messi is the first footballer to win the global award for two years in row since Brazil's Ronaldinho claimed the honor in 2004 and 2005.

23-year-old Messi starred as Barcelona retained Spain's La Liga title and has continued his heroics as they lead the standings this season.

Iniesta and Xavi share a midfield partnership for the Catalan giants and both played a key role as Spain won the World Cup, with Iniesta scoring the only goal of the final as they beat the Dutch 1-0.

To tell you the truth, I did not expect to win today, to win it makes a very special day
--Lionel Messi

He said he had been surprised to win the award again.

"To tell you the truth, I did not expect to win today, to win it makes a very special day," Messi told the audience at the gala ceremony in Zurich, which was hosted by CNN's Pedro Pinto.

This year was the first for the FIFA Ballon d'Or.

Earlier, Jose Mourinho was named Coach of the Year for leading Inter Milan to an historic treble of Champions League, Serie A and Italian Cup.

Have your say on Blatter's decisions

Brazilian Marta took the FIFA Women's World Player of the Year for the fifth successive year.

Part-timer took on the elite of world football

Burrows, whose spectacular backheeled volley became a big hit on YouTube, was mixing it with the elite of world football, among them Messi, from a selection of 10 spectacular goals.

But football fans picked Altintop's goal for his country in a European Championship qualifier against Kazakhstan.