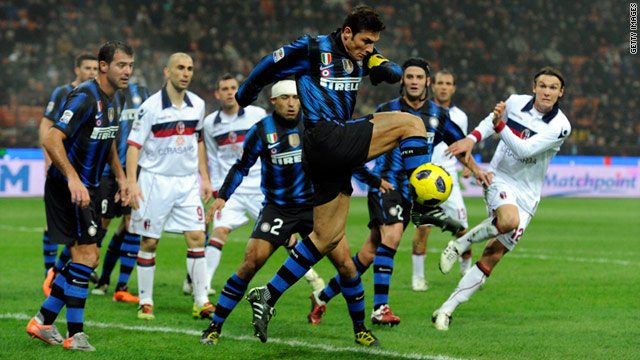 (CNN) -- Javier Zanetti equaled Inter Milan's Serie A appearance record as the Italian champions continued their revival under new coach Leonardo with a 4-1 win over Bologna on Saturday.

The 37-year-old midfielder matched the mark of 519 league games set by Giuseppe Bergomi in 1999, having passed 700 in all competitions in the black and blue of the Nerazzuri in May's Champions League final win over Bayern Munich.

He will have the record to himself if he plays in Wednesday's home match against Cesena.

"There is no end to the positive things to say about Zanetti, he is a wonderful athlete and human being. He was my first signing," said Inter president Massimo Moratti, who brought the former Argentina international to the San Siro in 1995.

But it was one of the club's more recent signings who inspired a win which lifted Inter into fourth above Roma on goal difference and eight points adrift of leaders AC Milan, who travel to Lecce on Sunday night.

Cameroon striker Samuel Eto'o set up Dejan Stankovic's 20th-minute opener and scored a second-half double to take his tally to 23 for the season in just 26 games in all competitions.

Stankovic provided a perfect throughball that allowed Diego Milito to score the second goal on the half-hour, with the Argentine having headed against the near post early in the match.

Milito's clever backheel provided Eto'o with a one-two into the area in the 63rd minute and the former Barcelona star slotted home a right-foot effort.

The four-time African player of the year made it 4-0 with 19 minutes to play as he curled in a freekick, while Henry Gimenez scored a consolation six minutes later for the visitors -- who remained in 15th place after being penalized three points earlier this week for infringing rules over tax and player payments.

It was the fourth successive victory for Brazilian Leonardo, who replaced the sacked Rafael Benitez last month.

Second-placed Napoli could have closed to within a point of Leonardo's former club Milan with victory at home to mid-table Fiorentina, but ended up being held to a frustrating goalless draw.

It was a disappointing result following last weekend's 3-0 win over Juventus.